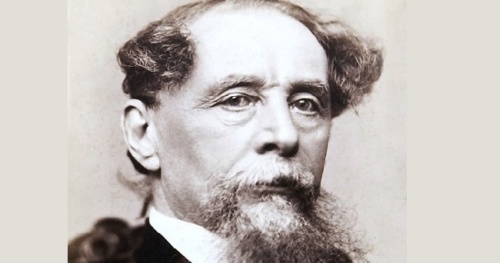 Widely regarded as the greatest novelist of the Victorian era, Dickens provided the nation with many memorable titles and characters from Oliver Twist through to his penultimate novel Great Expectations. Although born in Portsmouth, where he spent his working years as a factory worker, these characters gave us an invaluable insight into life in the capital during this period. And he did all this despite having no education and developing his writing and editing skills through years of painstaking trial and error. He eventually became a Parliamentary reporter and freelance journalist before finding literary success.

London themes proved pivotal in his breakthrough work. His collection of short fiction called the Sketches of Boz typical here, with titles such as A Dinner at Poplar Walk an indication of the cockney goings on. And with this work published in newspapers and periodicals from 1836, it was only a matter of time before news publishers picked up on his talent and commissioned a similar serial of the Pickwick Papers which would give him this big break.

Pickwick Papers started out as a mainly illustrated, serialised piece called The Posthumous Papers of the Pickwick Club and dealt with ‘cockney sporting scenes’. Were it not for publishers Chapman and Hall’s decision to change the format of this picture-novel, he perhaps would never have got his literary break. It was triggered when illustrator Robert Seymour committed suicide and they decided to decrease the number of illustrations, increase the amount of text and so hired Charles Dickens. Published in monthly installments, it later became Dickens’ first novel and an immediate success; although there would always be contention over who owned the rights to the novel since Seymour’s widow said her husband created the original idea.

1836 was a life-changing year in his life for other reasons. He also married Caroline Hogarth, with their first child coming a year later. This flood of fortune showed no sign of drying up, with the successful publication of Oliver Twist also coming in 1837. Settled with his family at 48 Doughty Street, London in the heart of WC1, this domestic and career bliss was momentarily thrown that same year when his sister-in-law who was living with them died and Dickens missed his publication instalments for the first time in his career.

Dickens would later separate from his wife and the acrimony would live on in the documents of historians but certainly not in the heart of his estranged wife who on her deathbed handed her daughter Katy the love letters Dickens had once sent her and told her to give them to the British Museum so the world would remember he once loved her.