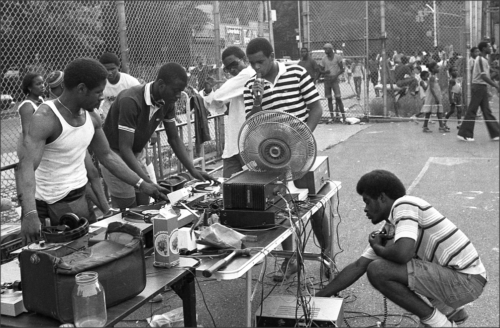 44 YEARS AGO today a new sound called hip hop was born when legendary New York DJ Kool Herc held one of his block parties, mixed a couple of tracks together and kick-started a musical revolution. The exact address was 1520 Sedgwick Avenue, Bronx, New York, the date August 11 1973 and back then the 18-year-old Jamaican-American had no idea of the influence he would have over popular music.

In this Brexit and migrant crisis age Herc’s certainly a poster boy for popular immigration because if Clive Campbell (his real name) had never moved from Jamaica to the Bronx aged 12 this urban music form would never have been born. His concept was simple but effective – play the instrumental or break parts of the dance tracks while his MC pal Coke La Rock ‘rapped’ to the crowd and then watch them lose it!

Herc used two sets of the same record on two turntables so that he could extend the breaks as long as he wanted and this style came to be known as break dancing. Coke La Rock’s crowd-pumping style came to be known as rapping and the subculture suddenly had its easily identifiable labels and expressions. DJs in other neighbourhoods along the East Coast imitated this successful formula, in some cases recording their own tracks; notable examples Afrika Bambaata and Grandmaster Flash. Interestingly enough, Kool Herc never did.

This also led to a number of groundbreaking London-based hip hop stars including:

Fun-Da-Mental This British–Muslim collective played their bhangra–inflected brand of rap at the Notting Hill Carnival in 1991 and then went from strength to strength.