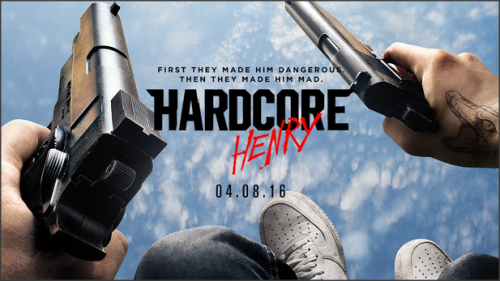 This review should really begin “I have just seen the best P.O.V movie ever made.” The minute-to-minute action is unrivalled in any film in recent memory where the camera holds the perspective of the main protagonist. However, this review instead begins “I’ve just seen the worst film of 2016.” The explanation is as follows.

Directed by Ilya Naishuller, this frenetic science fiction piece is told from the P.O.V of a mysterious character addressed only as Henry. Not much is known about him although we learn pretty quickly he is half robot and has been seriously injured. Lying there on an operating table, the unwitting guest of a Moscow tech corp who are redesigning his limbs, it’s also obvious he has very little awareness of his physical condition or surroundings. We also learn his father is played by Tim Roth. Actually, to be honest 1) you don’t realise the slightly chubby, middle-aged guy is Tim Roth and 2) you are unaware he is playing Henry’s dad. None of this is clear until the closing credits. And that’s the main problem with the film – its wafer thin plot and absence of any meaningful narrative. Never let a good story get in the way of two and a half hours of mindless action eh?

The opening ten minutes of the film are about as informative as it gets before a gun-wielding gang storm the building and try to get their hands on Henry. He flees in a rather slick looking futuristic pod and it has to be said the movie’s sci-fi set up in these early scenes is pretty impressive. Once he starts running around it loses all meaning and quickly resembles one of those virtual reality video games where you go from room to room and situation to situation beating people up and basically trying to kill as many people as possible within an allotted time. And, no, that’s not an oversimplification of the plot.

OK the stunts are impressive. But that’s all it seems to be about, stunts. Well actually stunts and fights. Also Henry running (lots of running by the way). Yep! Henry killing and people trying to kill Henry. It would all make sense if the film’s producers explained that it was based on a video game or the whole thing existed as a publicity stunt for a gaming product. If not, it’s hard to get the point of it. You’ll fight to keep yourself from falling asleep in the cinema even though it is one of the noisiest films ever made. 24-7 machine-gun fire, mindless motorway chases and crashes, it’s got the lot.

Bring a good book to read for that period one hour into the film when you realise the film-makers aren’t kidding and things really aren’t going to change much for the character beyond the odd punch-up. And a cup of water will come in handy to chuck over yourself into the last hour when you’re struggling to keep your eyes open watching this repetitive rubbish. After watching this you’ll mourn the two and a half hours of your life you’ll never get back.