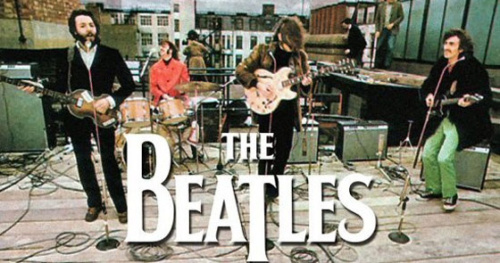 On January 30th 1969 the world’s greatest band performed an impromptu gig on the roof of their Apple offices in Saville Row. It would prove to be their last. The 42-minute set drew large crowds and also the concern of local police who tried unsuccessfully to pull the plug. The band settled for turning down the volume.

But it all may have never happened. The band agreed on one thing at least (unusual for them during this quarrelsome period) – they wanted to play in a unique location and alternatives such as a ship and the Sahara Desert were also considered before they opted for the roof. Much to the displeasure of John Lennon who was concerned his fingers would freeze up while playing guitar on this bitterly cold winter’s day. He eventually settled for wearing Yoko Ono’s fur coat. Not to be outdone, Ringo wore his wife’s red mac.

The line up included American soul musician Bill Preston on keyboards as ‘the fifth Beatle.’ He was brought in by George Harrison to cut into the Fab Four’s familiarity and keep the band members on their toes – perhaps to ensure the sound remained tight and the performance wasn’t treated too casually. Did it work? Paul McCartney was reported to have continually changed the lyrics to reflect their unusual venue, singing: “You’ve been playing on the roofs again, and you know your Momma doesn’t like it, she’s gonna have you arrested!

Everything was captured by an audio-visual team which included director Michael Lindsay-Hogg, in a well thought out strategy which had emerged from their Get Back rehearsal sessions and the concept and marketing for this latest album. The Get Back theme was a collectively conceived drive to literally ‘get back’ to their rock roots and ‘get back’ to the band unity that existed before fame and fortune. In that respect it failed and actually hastened the break up of the world’s greatest band.

Tagged with:     Apple, The Beatles