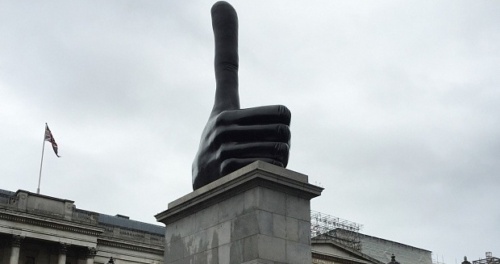 As the shortlist for the fourth plinth in the square’s north-west corner gets underway, it’s interesting to chart the history of this public art space which has drawn much controversy because of the dominance of non-traditional and post-modern candidates. When architect Charles Barry designed the square in 1841 it was envisioned the plinth would hold a statue of William IV, but when this plan fell through it was left empty. Nelson has never been totally alone on his famous column though, there were also the statues of the generals Havelock and Napier on the east and west corners respectively.

Deputy chair of the Royal Society of Arts, Prue Leith’s determination to fill it with something more in keeping with the times saw Marc Wallinger’s Ecce Homo become the first sculpture to occupy the space in 1999. This representation of Christ bears the latin title that Pontius Pilate uttered when presenting Jesus to the baying crowds – ‘behold the man’. Wallinger, who had been focused on art which incorporated Christian themes, had been led to believe that the statue would be permanent and was disappointed to discover that despite beating nineteen other entrants, behind the scenes politics would come into play as the authorities picked up on the media frenzy.

It’s currently occupied by Brighton artist David Shrigley’s sculpture of a giant black hand giving the thumbs up. A positive symbol in the heart of the capital from a sculptor who works with the themes of absurdity and satire. So what is he really saying? There’s still a lot of time to find that out because it remains on the plinth until March 2018.

The 2018 candidates include a child’s toy-like construction of a truck, ladders and oil cans by Damien Ortega and the Michael Rakowitz reconstruction of Lamassu the winged bull which was destroyed by Islamic State. He’s given it the more ‘succinct’ title of The Invisible Enemy Should Not Exist. The piece most in keeping with the square’s sober and historic air is The Emperor’s Old Clothes, which could almost pass for a traditional classic if it weren’t for the fact this statute of a fabulously attired emperor has no head. Or perhaps – considering the state of many similar headless relics in the British Museum – because of this.

For the chance to view the shortlisted work pop along to the National Gallery’s Annenberg Court where miniature models (maquettes) will be exhibited from January 19th to March 26th.