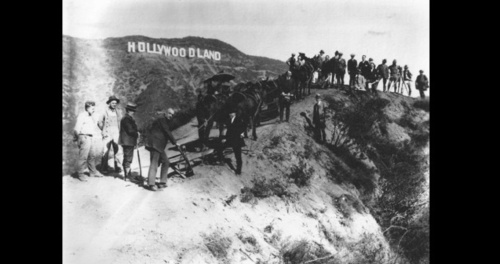 IT WAS on this date, July 13 1923, that perhaps the most famous sign in the movie industry was officially dedicated over the Hollywood Hills on Mount Lee, Los Angeles, California. The 50-foot letters originally spelled Hollywoodland but in 1949 the ‘land’ part was removed.

It was erected as a local real estate subdivision by Woodruff and Shoults advertising a new housing development and was only meant to stay up for a year. It was left untouched during the rise of the movie era and is now an iconic site visited by tourists and movie fans flocking to Griffin Park to savour some of that cinematic glory.

In 1978 Playboy founder Hugh Hefner led a campaign to have the extensively damaged sign permanently replaced by a more durable structure. Rock singer Alice Cooper and crooner Andy Williams were amongst the donors who paid for the $250,000 replacement.

Today, 50 touring companies try to cope with the great demand to hike up the Santa Monica Mountains and see this famous sign. The Hollywood Sign Trust recommends using viewing platforms at the Hollywood and Highland Center and the Griffin Observatory.