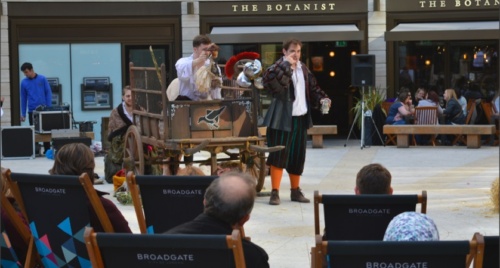 EC2’s Broadgate Circle dining and leisure hub is getting in on the act, quite literally, as April celebrations of Britain’s greatest literary talents get underway. Its Literary Greats Season  honoured the birth dates of Charlotte Bronte (April 21) and William Shakespeare (April 23) through music, theatre and the spoken word.

On April 23rd the London Contemporary Theatre performed high speed versions of Shakespeare classics including Much Ado About Nothing and Midsummer Night’s Dream in 40 min slots. All the plays took place outdoors on a pretty chilly April afternoon so they have to be commended for their plucky commitment.

From pop-up plays to open mics, for many who passed by Broadgate circle, it sure was a good dose of lunch time entertainment this April!