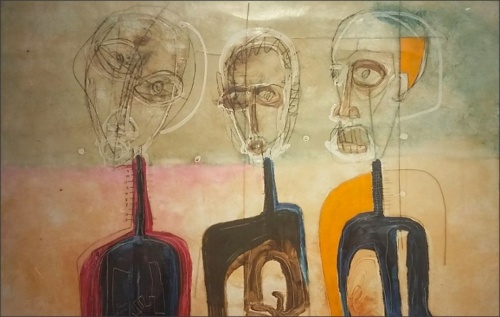 This joint exhibition at the Africa Centre featuring work by Zimbabwean artists John Hlatywayo and Tafadzwa Gwetai is presented as an exercise in juxtaposition. An opportunity to experience how their unique approaches to people watching can be both complimentary and individualistic. Hlatywayo with his majestic but haunting metal sculptures marshalling the gallery space and Gwetai’s figurative collages which give the observer unconditional glimpses into the soul beyond a society. Curated by Stephen Goldsmith, an international trader in African art and sculpture, it embraces the proud cultural borders of African identity as against the flux of time, consumerism and an increasingly digital society.

Tafadzwa Gwetai’s eight year residency at the National Gallery, Bulawayo and previous residency at Gallery Delta, were punctuated by other such distinctions in his career such as his Assistant Curator role at the 56th Venice Biennale’s Zimbabwe pavilion. His evolution as abstract/figurative artist embracing not just talent and method but experience and observation of both the art world and African society. He is, indeed, a seasoned people watcher.

The skeletal figures in his work seem at once nervy, fragile and introverted and yet demanding attention and emotive response. Stained with colour rather than completely painted they are set against skulls not too dissimilar to those from traditional Shona sculpture and so take on a quality that draws you further into the psyche of African culture . Certainly not ceremonial here but nonetheless totemic these cut out collages stand out as proud and vigorous commentators despite their deliberately cramped composition. This represents the hustle and bustle and fast-paced modernisation of 21st century society perhaps. Titles such as Sign Of The Times: Internet Way and Standing In Time suggest so.

John Hlatywayo’s sculptures of African women and family do not set out to compliment his co-exhibitor Gwetai but do so by default because of the seamless relationship between abstraction, space and the hard edge that separates. Now in his nineties it was not till later in life that he ventured into metal sculpture, first exhibiting at WeldArt 79 where he won joint second prize. Now because of failing eyesight his rich portfolio of work has come to its natural end.

His exhibited works rethink the boundaries of metal-craft. On ‘Talking Woman’ there is a mechanical quality to the neck brace she wears that is incomparable to any of the other exhibits. Those others seek to refashion metal’s lifeless, rigid, functional quality but here it is some kind of alternative, stand-out statement. Speculation is pointless. It may be just mere decoration yet marks the sculpture out as beautiful, dignified but somehow burdened by that one aesthetic remark.

The People Watchers exhibition is at The Africa Centre, 66 Great Suffolk Street, SE1 0BL  from 21st April to 7th May.