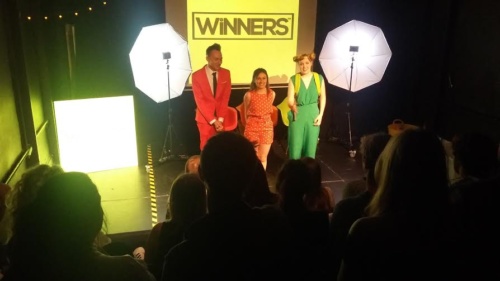 If you’ve had your fill of reality TV and talent shows such as TOWIE, I’m A Celebrity and X Factor perhaps a trip to the theatre is in order. And as chance will have it a certain new stage production makes light of all the hopeless, talentless types seeking overnight fame on the small screen and does so with tongue firmly in cheek. ‘Losers’, written by and starring Arthur Jones, Rachel Johnson and Sophie Thompson pulls no punches in lampooning the airheads willing to bare their souls before millions regardless of whether they can string two notes together.

This interactive piece is both entertaining and charmingly easy to follow. Perhaps deliberately so, catering to an audience dummed down by prime time slop produced by money-grabbing TV execs. The characters all have the actor’s real names and are all easily identified by their colours – Arthur in a garish red suit, Sophie in green blouse and shorts, Rachel in orange. They are contestants in a game show where they compete to show who most deserves to be famous and you’re even given a fully-functional electronic voting handset to get in on the act. Vote red, green or orange. The questions are suitably ludicrous. The opening test question ‘Who do you prefer Beyonce, Lady Gaga or Miley Cyrus more or less sets the booty-shaking standard. Of course Beyonce won on the night. Again a little later the contestants get to release their inner divas during a Beyonce dance contest and you are asked to vote for the best Beyonce out of the three. The loser gets to eat cat food!

One suspects there is an underlying method in their madness. A pseudo-intellectual desire to tap into the drives of the collective conscience dressed up as comedy. Questions such as ‘God or Atheist’, ‘wealthy contestant or poorer one’ and ‘contestant whose parents are married or separated’ suggest this. But that over-riding slapstick is always there. Well into the production you’ll realise you’re almost uninterested in the actual talents of the contestants and become more consumed by their showy egos and vacuous ambitions. However, Rachel can actually tap dance Arthur is an OK magician and pretty decent contortionist and er Sophie…is harmless and inoffensive. It’s basically pick a favourite time and pretty soon you’re cheering on your colour like a football fan.

It’s not all one way traffic though the audience get to ask the contestant questions. These are popped into a ballot box before the show and include gems such as “What’s your favourite Greggs pasty?” and that sits quite uncomfortably with “What do you do with existential sadness?” A little too deep for a reality TV show you might think but rangey enough to test the expectations of any audience lazy enough to think they’ve merely come to see three Jade Goodie, Lady C or Brian Belo wannabes. All-in-all highly recommended for fans of interactive theatre and reality TV alike. In fact haters will probably like it even more.