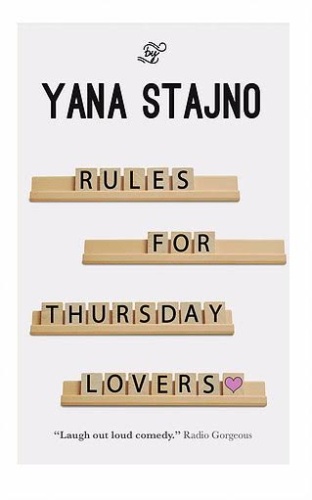 The title sounds delightfully cryptic but on second glance says it all really. Yana Stajno’s debut novel bounces along at a rambunctious pace from opening chapter to final paragraph, bringing together two old school pals – the slightly snooty Fiona and more down to earth, personable Angie – at a timeshare event on a London barge. They soon find that despite the passage of years and different paths to love and fortune they share more than just this trip down the River Thames in common. Call it a midlife crisis, boredom with their husbands or just pure lust, they come up with a pact to share a lover every Thursday at an apartment owned by a mutual acquaintance. Auditioning that Thursday lover proves problematic. Keeping to the terms of the pact even more so.

Within a chapter of these dodgy goings-on, you’ll quickly realise that this author can write. Er.. that’s what authors do, you’re probably thinking. If you have the fortune to make your living reviewing books and have waded through them by the barrowful you’ll realise that’s not necessarily so. But her effortless ability to weave a sense of infectious chaos around the lives of the main characters and a stylistic turn of phrase here and there (“I know all about ships,” said Gregoyan, working the words around as it was a ripe peach.’), with all of this galloping in and out of highly marked plot points you have a sure-fire candidate for the five star club.

You can almost sense the impending collapse of their tidy little middle class worlds but the conclusion is still a shock. Angie’s safe, harmless husband a doctor called Ted has an almost Jekyll and Hyde-like switch in morals and fidelity. Fiona’s husband Guy, a working class pizza deliveryman turned society chef, fares little better. There’s more than a hint of karma about the way all the spouses get their comeuppance, dragging each other into this vortex of clandestine love pacts until they are forced to ‘fess up’ and face the sordid facts.

And when when it’s time to fess up, it is done so without lazy clichés and tidying of loose ends despite the opportunity to do so when they are all drawn to that ‘love apartment’ at the same time on the same day in a scene that has slapstick written all over it. Even the booze-bibbing, prissy care home manager Miss Willoughby gets an unexpected invite. I’m amazed the old dear didn’t have a heart attack! (There’s definitely something ‘matron from the Carry On films’ about Miss Willoughby.)

What you’ll enjoy most about the book is it’s written by someone who cares about every line. Nothing about it is rushed even when the characters are rushing about. No leaving gaps in the plot development. No ending the novel as if that final full stop represents an actual exhalation by the author freed from an onerous and burdensome task. And you’re not left with any undying declarations of love or big punch ups, nor moral finger wagging –  just a smile, a wink and a hint of what might be. And this might be the funniest book you’ve read all year.

Tagged with:     Rules for Thursday Lovers