Home  /  Food & Dining, Reviews  /  M Will Leave You Shaken But Not Stirred (Restaurant)

M Will Leave You Shaken But Not Stirred (Restaurant) 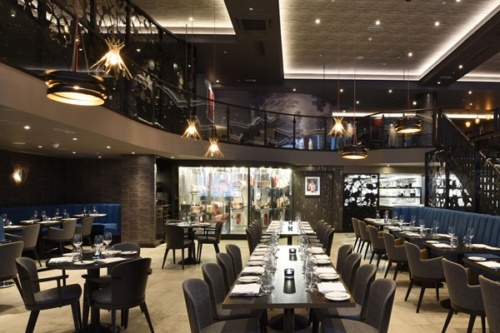 Review of: M Will Leave You Shaken but Not Stirred (Restaurant)

Described on Bookatable as a ‘James Bond-style restaurant’, one can only guess they are referring to its air of sophistication and cool because there’s not any Bond memorabilia in sight and the waitresses don’t look anything like Bond girls. This award-winning restaurant run by Gordon Ramsay protégé Michael Reid is too classy for that. And no it isn’t named after 007’s fictional Head of Secret Intelligence Service.

It’s two minutes from Bank station and feeds the City crowd, so suits and ties are not necessarily the standard but definitely the norm. We refer again to that glitzy elegance; the high ceilings have low hanging cord lights dimmed at just the right values to give the brown paneling and leather turquoise seating areas the desired ambience. There’s a mezzanine level bar and lots of contemporary art on show but don’t go looking for paintings of Miss Moneypenny or framed golden guns.

Instead kick things off with a starter of Buttermilk Fried Chicken – which sounds mouthwatering enough. Even before this arrives you’ll be served ‘Bites’ such as Black Tarmasalata which is a dark grey paste which gets its colour, consistency and (obviously) taste from the black olives and cod roe it’s made from. It comes served with the chef’s own bread made from potato and honey.

By the time the starter arrives you’ll be left in no doubt that everything comes in gourmet proportions and is presented with Michelin-starred elegance. The black slab used as a dining plate for this particular dish completes the metaphor of a masterpiece, since it looks just like an artist’s palette. The decorative condiments forming a semi arc on one side were not unlike the oil paint blobs on such a palette.

The Dr Burger on the Mains menu sounds a little Bond-like but the Argentina Las Pampas Rump steak with chips reads a hell of a lot tastier. There’s an open plan kitchen where you can watch the chefs working away on the third instalment of your ‘four courses and a glass of prosecco’ but that will only make the anticipation even greater. A Black Tarmasalata bite while you wait anyone?

And you can’t go wrong with a dessert of Dulce de Leche Flan, an Italian flan with salted duche and coconut crumble. Verdict? Nobody Does It Better.