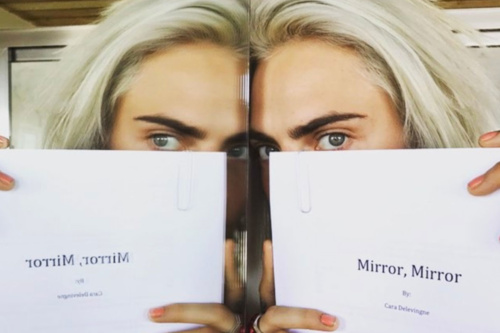 Fresh from her successful role as Laureline in recent movie Valerian and the City of a Thousand Planets comes Cara Delevingne’s latest creative venture – her 368-page novel Mirror Mirror, co-written with Rowan Coleman and published by Trapeze. Judging by her performance in Luc Besson’s sci-fi flick, she has undoubted talent but English fiction writing is a foray into the realms of Austen and Bronte. Will the 25-year-old actress and model’s efforts here match her acting talent?

However, Delevinge claims her book is aimed at teenagers, many of whom regard her as a positive role model who can relate to their teen angst and in some cases adolescent disorders, themes touched upon in the book. She openly admits writing the book to reach out to this age-group but also sought to test her potential by seeking pastures new.

The Mirror Mirror in the title refers to the name of a band started by the central characters, a bunch of sixteen-year-old pals. They find their lives turned upside down by the attempted suicide of a band member. The teenagers aren’t so sure it was a cry for help.

Hammersmith-born Delevingine has had that famous name up in lights from an early age; she was spotted by Storm Model Management while still at school. But much has been made of the fact that her name on the book’s cover dwarfs that of humble co-author Rowan Coleman. One supposes they are staying true to the rock band theme of the novel and just letting everyone know who the headline act is. This coming-of-age story will be available for purchase from October 5th.