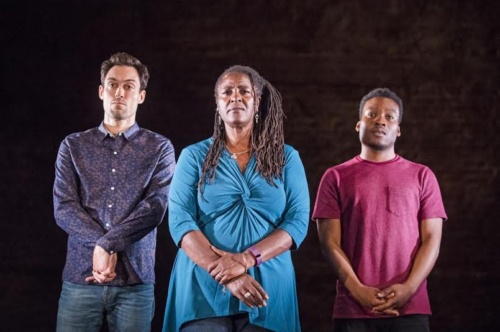 Review of: Pigs and Dogs (Theatre)

Caryl Churchill’s relationship with the Royal Court stems back to her 1974-1975 residency there and the theatre’s retrospective of her plays on her 70th birthday shows the high regard in which she is held. Notably, a 2009 short play Seven Jewish Children (also at the Royal Court) about the history of Israeli-Palestine relations was shorter than the equally economical 15min Pigs and Dogs but sets the standard for her preference for short-form text. This new play is an angry commentary against homophobia in Africa. It addresses Uganda’s 2014 legislation which made homosexuality punishable by death later amended to life imprisonment, while Robert Mugabe’s comment that “If dogs and pigs don’t do it, why must human beings?” has given the play its title.

Much has been made about the play’s length and even as you enter the auditorium ushers warn you there are no intervals (the play is probably shorter than your average interval) but this suits its punchy, rapid-fire, aggressive style with each of the three actors on this minimalist stage, lined up and opening with the line “Somebody says’. No doubt implying that whether by use of gossip or verbal authority, language in whatever form sanctions the ill-treatment of homosexuals.

Of course, there is no time for costume changes and the stark, confessional style lighting is just what is needed for such sensitive subject matter. One actor steps in, another steps out until by the time you are informed that 3 months for killing your wife and 6 months for sleeping with a man is somehow, somewhere regarded as law the bigotry inherent in some judicial and political systems becomes branded on your consciousness. Influences inside and outside of Africa are attacked from British Anti-Sodomy laws to American evangelists in Africa preaching against the death penalty for homosexuality but insisting that the act is unnatural.

The play’s content is sourced from the work of sociologists Stephen O’ Murray and Alan Roscoe, whose book Boy-Wives and Female Husbands examines how homosexuality has existed in Africa throughout the centuries. Amazonian warrior tribes that actually existed took male prostitutes, male chiefs who dressed as women, female chiefs who dressed as men, the list is endless as the gender lines blur. Like a live news bulletin addressing an unfolding tragedy but instead of the familiar refrain of “breaking news..” there’s that ever-constant “somebody says.” A torrid examination of how we get our information and what we do with it.

Tickets for Pigs and Dogs at The Royal Court Theatre are on sale until 30th July.