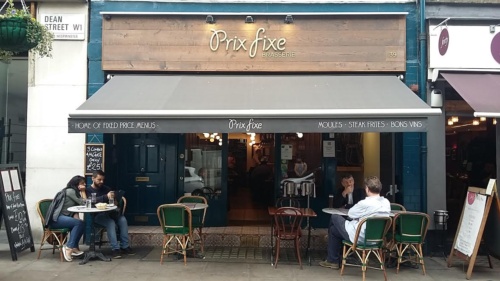 This French restaurant on Dean Street, Soho does what it says on the packet, but with an elegant continental twist. The term prix fixe means fixed price in English and it offers showpiece set menus of two course lunch for £10.90 and also Pre-Theatre two courses at a reasonable £13.90. The proximity to Theatreland’s Shaftesbury Avenue proves handy for those seeking a cultured bite before curtains open. However, the Ala Carte Menu is never to be overshadowed, not where the first tasty starter dish reads as ‘Hand chopped steak tartare with capers and crostini’. Hmm..and suddenly the set menu isn’t as appealing anymore. Even the Ala Carte Menu has a fixed price option, with three courses costing £25.90.

If you desire the 3 course A-la Carte menu, you can’t go wrong by choosing a starter of Goats Cheese and caramelised onion parcel. It looks like a spring roll but tastes like paradise, and is perfectly complimented with the mulled wine poached figs which offer a hint of honeyed sweetness alongside the balsamic rocket. This enticing introduction to the finer qualities of French cuisine even at this early stage in the meal has you almost drooling for the main in spite of dining etiquette.

A main course of Bavette Steak with shallot and mushrooms in red wine bordelaise sauce will broaden one’s horizons as regards what we English commonly regard as steak. The French once unflattering referred to the Brits as Le Rosbif (roast beef) obviously because of our historic eating habits which were at odds with their celebrated finer touches. However, convincing an Englishman that flapsteak (as we call Bavette Steak) is a gourmet delicacy worth a punt over traditional well done steak will be a sight to behold. That’s because it’s tougher and chewier than others.

But the French know their food. Don’t mess with them. Their waiters are on hand advising you about what might best serve your dining needs, explaining this type of meat comes from the front of the cattle and if ordered well done is considerably chewy. Rare or medium rare would cut down on denture time. So medium rare it is. And delicious too. Anyway, the homemade french fries that come with this dish will always go down well with ‘Le Rosbif’ diners. As regards this particular main course, they’ve got the balance just right.