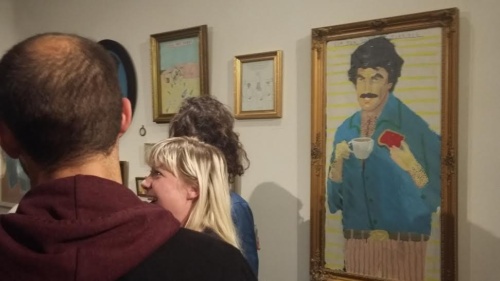 Review of: Slebs and Somethings (Exhibition)

The list of artists who depict celebrities in ironic ways is endless. From Jeff Koons’ porcelain sculpture of Michael Jackson and Bubbles to Gavin Turk’s ‘Pop’ waxwork of Sid Vicious, the fascination with turning superstars on their pretty little heads has endured. Dan Jamieson is an award-winning caricature artist who has put a new slant on this tradition. His May-June exhibition at L’Entrepot, Dalston Lane is a satirical take on household names like Beyonce, Kanye West, and even art icons such as Picasso and David Hockney.

His scrawls and scribbles are deliberately unflattering and look a bit like fan art (you know the kind sent by obsessed and deluded types using biro pens and their kid brother’s crayon set. Alone in believing they are the next Michaelangelo and hoping Katy Perry, Rihanna or Susan Boyle notices it too.) Each one has a cheesy punchline, often a relevant play on words. Some excruciating examples include ‘Mariah’s Scarey’ (Mariah Carey) ‘Kanye Wild West’ (that one’s self explanatory) and the less succinct but no less unbearable ‘Beyonce Making Dessert. She Realises You are Still Finishing Your Main, So Apologises Whilst Saying “I Don’t Think Your Ready For This Jelly.” Lost? Remember the Destiny’s Child hit Bootilicious which has that unforgettable line ‘I don’t think you’re ready for this jelly, cos my body’s too bootilicious for you babe.’ Get it?

Full-on satirical and tongue in cheek stuff. It’s supposed to get on your nerves and does, taking the guff of celebrity and turning it into a slogan that will squeeze the air out of all that over-bloated celebrity bluster. Seeing great 19th century painter Cezanne as a would-be beach hunk showing off absurd looking muscles and grabbing a tan certainly does this. The title of the piece ‘Cezanne’s New Tan.’ Yes you’re supposed to laugh. Andy Summerhols (Andy Warhol) joins him on this holiday escape clutching a droopy ice cream cone that looks a little sorry for itself. The Great Depicter being depicted by a bolshy heir apparent.

You’ll probably look at these paintings and think, ‘I could do better.’ But that’s the point. The purpose of caricature is to drag the simulacrum out of its safety zone and strip it naked, warts and all. This isn’t a figurative art competition, it’s a comment on society. Well, a bit of idol-bashing as well really. Perhaps that’s healthy in a society where we are socialised into worshiping the rich and famous without questioning the value system which makes us do so. Jamison’s art pulls us back down to street level, and with an unyielding grip round the throat keeps us there. But even while in the gutter we’re still smirking up at the stars.

Slebs and Somethings by Dan Jamieson runs at L’Entrepot, Dalston Lane May 20th to June 5th.