Home  /  Drama & Theatre, Highlights  /  Something Something Lazarus – An Interview with Writer John Myatt

Something Something Lazarus – An Interview with Writer John Myatt 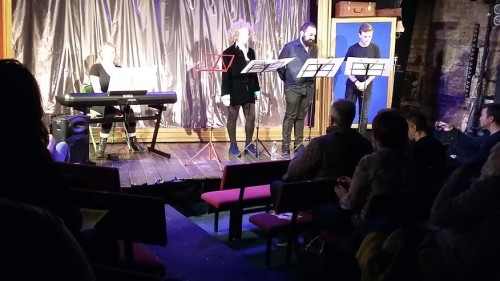 OK I’m not going to give out any spoilers but a musical is taking shape which promises to raise many a theatre roof starting with a certain venue in Upper Street, Islington come spring 2016. My interview with John Myatt, writer of Something, Something Lazarus took place at its packed concert preview at The King’s Head Theatre, Angel. And what a preview it was for all those lucky enough to get an invite. Ushered to our seats with our hands full of complimentary red wine and mince pies we were later greeted with an offbeat, loud, high-flown, musical comedy with dark, surreal moments. There’s broken hearts and death and strutting cabaret divas. What more do you want? OK that’s enough of the spoilers. Let’s just say it was originally based on the writer’s former partner and their break up but has now morphed into a chest thumping, multi-headed creature that holds a mean stage. Feted in promotional material as a new kind of musical it certainly didn’t disappoint.

So back to our interview. Writer John Myatt graduated from Manchester Met with an MA with Distinction in Creative Writing after gaining a degree in English from Manchester University. Nominations for Manchester Evening News Drama Awards followed but the evolution to this play took a strange detour. He admits to being a fan of the Rodgers and Hammerstein musicals as well as Sondheim but his current project emerged due to a fascination with Lawrence D Cohen’s Carrie: The Musical based on Stephen King’s novel turned horror movie. Oddly enough it’s nothing like it. But Myatt wrote his own version of Carrie called Carter King and would later use some of the adapted material in Something, Something Lazarus as the plot took shape.

After a year and a half of feverish writing the stage to this tragicomedy was set – a downbeat cabaret bar and a rehearsal for a show that soon turns into an explosive confessional of sorts, with Vee a showbizzy diva conducting the chaos from centre stage and Daniel the owner of the bar seemingly going into meltdown over his tortured love life and an unexpected gift from ex-partner Richard. Things turn dark pretty quickly and much talk of knives and axes. But amidst all of this the show must go on. Have I said too much?

After this preview concert the team are going to focus on a Kickstarter campaign for production funds. There is still a lot of time to get all the right elements in place as the musical is scheduled for a March 2016 world premiere. What I have seen of actors Daisy Amphlett (Della) Sharon Eckman (Vee) Ralph Bogard (Daniel) and Daniel Cech-Lucas (Jay) and their powerful dynamics indicate the production living up to its promise as a new kind of musical. So lookout for Something, Something Lazarus, directed by Dan Philips (on the left in the photo), written by John Myatt (on the right in the photo) and music by Simon Arrowsmith.