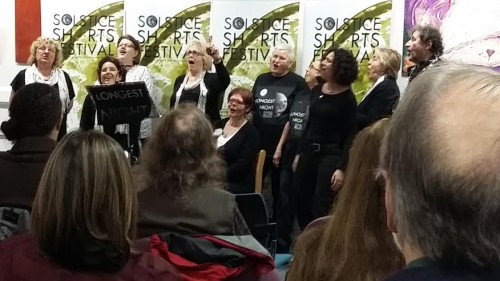 National Short Story Day falls on the same day as the Winter Solstice, December 21st, so it was timely of short story anthology publisher Arachne Press to put the call out to Britain’s literature lovers for The Solstice Shorts Festival: Longest Night, a mix of short stories, poems and folk music. The solstice, as you might have known from the title, is that time of year when the sun is in the lowest point in the sky resulting in the longest night in the calender. It’s a cause for celebration in the British Isles because of astronomical traditions going back thousands of years.

A large selection of short story authors had their work read by actors, all of them on the theme of The Longest Night and it was a great opportunity to get introduced to the capital’s unsung talent. The mix of tales was just right with the writing styles changing abruptly. But in a good way, enough to keep you on your toes and entertained. This was due in no small part to the storytelling skills of the actors. Competing for their potential audience with the likes of box office-breaking Star Wars: The Force Awakens which had its UK debut recently, they had only their voices and the power of the text to rely upon. Wonderfully raw. No special effects, no orchestral score, no light sabres to hide behind. And did so admirably.

Each completed story was separated by song. A vocal harmony group called ‘Vocal Chords’ were aptly named because they were just that! They performed a song called Wassail and did just that. Traditionally wassailers went from house to house during the festive period singing and offering blessings. And twas a hearty wassail this evening. All gathered were merry well before Christmas. Later, folk duo Ian Kennedy and Sarah Lloyd were introduced as multi-instrumentalists and singers but it was their acapella lullaby Ba Ba Lamie Noo which charmed. They sung it in an ancient Orkney dialect which was foreign to the ear but heartwarmingly melodic. Orkney figures prominently in solstice celebrations because its Maeshowe monument is one of the few in the UK which align with the sun on this day. Stonehenge in Wiltshire is obviously another.

The evening left an indelible mark – no, not quite a winter solstice spiritual awakening more a realisation that I don’t read as much as I should. And I do read, I really do. But how much is enough? Surrounded by books in Greenwich Library, hearing stories by author upon author on National Short Story Day 2015, it seems too much is never enough.