Home  /  Drama & Theatre, Reviews  /  The Importance of Being Earnest (Theatre)

The Importance of Being Earnest (Theatre) 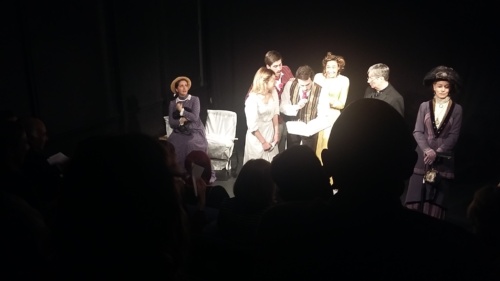 Review of: The Importance Of Being Earnest (Theatre)

This Oscar Wilde play was originally titled The Importance of Being Earnest, A Trivial Comedy For Serious People. Wilde added the extra as if concerned we might miss the point. And it’s heartening how the comedy elements have passed the test of time, perhaps because of ‘serious’ people forever finding new meaning in the once taken-for-granted elements of his work.

The play opens with the two main characters, best friends Jack Worthing (Joe Newton) and Algernon Moncrieff (Ed Clements). In this production Worthing is presented as upright, uptight, and – on the face of it – bristingly honest. Moncrieff is the cad here. He wears a burgundy smoking jacket with a matching necktie and as for that handle bar moustache.. yes a bit of a cad.

There’s a good guy-bad guy thing going on in this production but remember Worthing is bristingly honest in name alone. He pretends his name is Earnest during the courtship of Gwendolen Fairfax (Maya Helena) because upstanding Victorian women apparently have a thing for men with that name. The name ‘Earnest’ itself may be Wilde’s pun on the word for honest.

Certainly, Oscar Wilde meant it as a farce about Victorian values and institutions like marriage. The Etcetera Theatre on a winter’s evening ideal for all this stiff upper lip frostiness: first performed on a cold February in 1895 and Abiku Theatre premiering their version in the same month. In the opening Act there’s a bust of Beethoven set on a table next to a sherry decanter and it grimaces at all the carryings-on. It bears, perhaps accidentally, that stony countenance we’ve come to associate with the Victorian age.

The spotlit stage area is a fitting glare for the comedic upper-class household. The lighting values are just right for the energy and tempo of the piece. “A glass of sherry, Lane” Moncrieff barks to his butler. The poor man is so scrambled by the farcical carryings on at this point that he does just that and then takes a swig from the bottle himself as he exits the stage. And our grumpy Beethoven wobbles on the Paisley-patterned table cloth as if about to spontaneously combust. Every element of the minimalist set design carefully selected and positioned.

No one embodies these Victorian values more than Stefania Montesoalro as Lady Bracknell. When Worthing tries to woo her daughter she warns him off, concerned about background and breeding – you see, he can only trace his as far back as a cloakroom at Victoria Station. (He was accidentally dumped there as a baby by a nanny). Bracknell waves him away as if she were Queen Victoria herself, but Montesolaro gives her a playfulness which suggests eccentricity rather than snobbery.

With all these rumbustious goings on, comic timing and directorial touches play a considerable part in keeping it relevant to the contemporary audience without full on pandering to the social media generation’s 30-second attention span. Because of the nature of the satire, you wouldn’t be surprised if it did descend into slapstick but it never does. (image below is the original programme from Feb 1895) 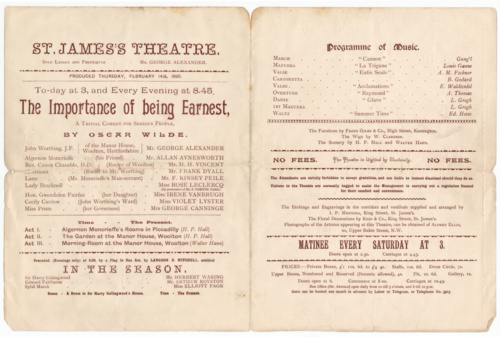 The Importance of Being Earnest, Etcetera Theatre, Camden 21st-26th Feb.