The Killing of a Sacred Deer (Film) 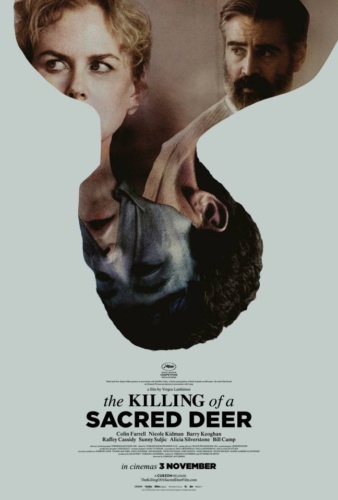 Review of: The Killing of a Sacred Deer (Film)

Yorgos Lanthimos, director of surreal 2015 feature Lobster, has a track record that suggests he doesn’t do mainstream movies and didn’t disappoint with the edgy, off-key The Killing of a Sacred Deer. Starring Colin Farrell as cardiovascular surgeon Steven Murphy and Nicole Kidman his ophthalmologist wife, the couple’s idyllic suburban life gets a chilling wake up call from a mysterious fatherless teen called Martin (Barry Keoghan) whom Steven has befriended. From the very first emotionless, deadpan conversation between the two in a local diner and the film’s early innoculous, anodyne yet chilly atmosphere accentuated with slow and foreboding pans and zooms, you soon pick up that this is no normal relationship.

Working out what their relationship is about is an unsettling experience for reasons that aren’t immediately obvious. Despite the lack of film score tilts that usually prod your emotions in the desired direction, there’s a grating unease as the puzzle unfolds. Even without the standard film grammar and with Steven acting uncharacteristically secretive about the lad but pally enough to buy him gifts and give him money, you build your suspicions. Martin has the emotionally dead air of one not completely at one with his thoughts and feelings. Mentally unbalanced? His affable naivety and old school politeness provide a socially acceptable veneer that masks those warning signs for a while.

Much of the film is drawn out at the same pace as those pans and zooms (which seem to be in every scene yet still do not feel over used.) The clinical atmosphere of the movie reflects the detached manner of these two medical professionals but the pace is given a shot in the arm once Steven invites Martin to his home to meet the family and Martin returns the favour. It’s at this point you suspect some guilty revelation such as Martin is his secret child or perhaps an ongoing affair with the mother but (without giving away any spoilers) that would be too obvious and when did director Yorgos Lanthimos ever do obvious?

Martin is charismatic in an accidental, hopeless sort of way and it’s one of the features that make him seem so harmless. Steven’s 14-year-old daughter Kim (Raffey Cassidy) falls in love with him even though he is not much of a looker and his wife later kisses his bloodied feet as if he were a messiah or saint. He’s none of these. Demon might be a little closer to the correct description. There’s a memorable scene where he is chomping away on spaghetti in full trailer trash mode and talking about his dead dad when you realize that his low IQ posturing doesn’t present the full picture of who he is. A few scenes later this kid will be twisting Steven’s family around his finger with the same ease and dispassion as that plate of spaghetti.

With Darren Aronofsky’s horror Mother! doing the rounds a couple of months ago, there are one or two directors with uncompromising experimental styles giving 2017 an autumn jolt and upturning the Hollywood apple cart. This movie will have everyone waiting to see what other cinematic gems Lanthimos has hidden under his Lobster-pink coat tails.