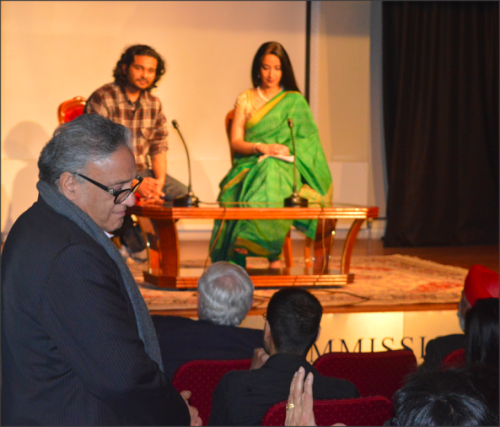 US/Indian feature-length comedy For Here Or To Go? played to a packed house at the Indian High Commission’s Nehru Centre in Green Park on March 8th. It was the film’s UK premiere a year after its sellout world premiere at Cinequest, San Jose, California. Written and produced by Rishi Bhilawadikar and directed by Rucha Humnabadkar, it is set in the thriving Silicon Valley area of San Francisco where even though the sun seems to shine every day not everything seems to go the way of the protagonists.

The plot revolves around software engineer Vivek Pandit’s run-ins with the US immigration authorities as he is at first granted a visa but his efforts to secure a green card are thwarted by their strict rules. This is a common experience for 1.5 million Indians in the US currently living with such uncertainty. The movie takes a more light-hearted look at the problem, giving its characters the gritty stance of being able to laugh at themselves a little – and also the system.

Vivek (Ali Fazal) shares his apartment with wise-cracking sidekick Amit (Amitosh Hagpal) whose comical outbursts make an already light-hearted atmosphere even more engaging despite their situation. Things become slightly less jovial when they are put on a government watchlist because of the activities of their new Sikh pal Gurmeet who they discover is attending a fake university. Gurmeet disappears with Amit’s passport in his bag. You can see where this is heading!

Vivek sees his American Dream slowly disappearing down the pan and this is underlined when he is visited by government authorities who actually tell him this – more or less. The only saving grace in his life is a blossoming relationship with American-born Shveta (Melanie Kannockada) who is falling in love with him but realises any future plans are put on hold because of the possibility of him being sent back to India.

It is well written and the plot development such that you daren’t look away from the screen for a second, so the script’s 30-odd rewrites have certainly paid off. The banter and chemistry of the main characters is not accidental. It’s so well executed that on-screen pals Vivek and Amit could quite easily have their own separate comedy show going on. Their timing is excellent and are very believable as a funny guy-straight man team. For those who hate subtitles, there aren’t many because the dialogue is mainly in English. Anyway, a few subtitles shouldn’t hurt any but the culturally blinkered.

The screening was followed by a Q&A with writer/producer Rishi Bhilawadikar who revealed he wrote it in 2010 and gave us an insight into those 30 drafts needed to get it ready for production. The visa rejection theme is similar to the real-life ones he experienced while seeking stay in the US. He now spreads his time between India, the UK and San Francisco where the movie is based. Much of this is spent seeking theatrical release for his movie. Since being completed in February 2015 it has been screened at thirteen film festivals all over the world with global distribution the much sought after icing on the cake.

The London Asian Film Festival is on until 13th March 2016 with closing night at the BAFTA.