UK/raine: Emerging artists from the UK and Ukraine (Art Exhibition) 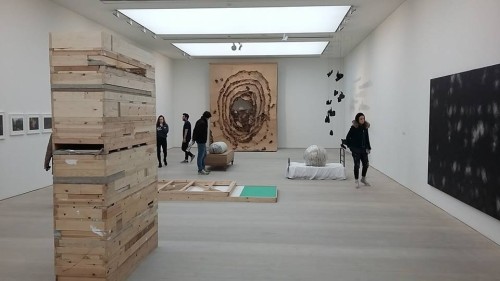 Review of: UK/raine: Emerging artists from the UK and Ukraine (Art Exhibition)

An open call for artists aged 18-35 from the UK and the Ukraine resulted in 10,000 entries of which 30 were shortlisted for this exhibition at the Saatchi Gallery, South Kensington. It marks a collaboration with the Firtash Foundation and follows on from their Days of Ukraine in the UK Festival. The entries ranged from non-gallery street art to gallery-specific installations and everything in between.

Hopefully you won’t mistake Anton Logov’s installation titled Ark as one of the exhibits they forgot to unpack because at first glance it seems to be little more than a huge plywood crate the size of a skip. A shoddily made skip at that because the gaping planks here and there barely cover the junk and all-sorts it contains. But you may be missing its sculptural significance here. Take a closer look at that so-called junk. The biblical postcards, the jacket on the hanger (the kind you always keep at the ass-end of the wardrobe out of arm’s reach) empty bottles, tins of paint and at the ship’s-head a Hellenic statue. This is indeed an Ark, certainly a ship of some sort. 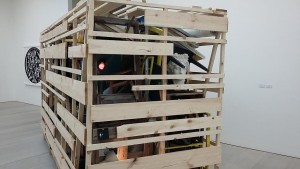 The theme of removal and renewal is a strong one. The artist cleverly personalises it with everyday items we all recognise so that it’s a journey the common man is familiar with and we can all take. Moreover, that Alexander The Great style sculpture of a head stands out as some sort of glorious promise despite this mundane existence and the chaos of new beginnings forced out of collapse. Bare that in mind after your divorce or the next time you’re turfed out of your flat for not paying your rent and are stacking up that delivery van with rubbish that never really served you well over the years. Because hey its not over. There’s a gem in your future somewhere, you just have to dig it out. 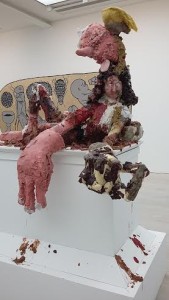 James Fitzpatrick’s ‘The King’ is a grotesque-looking mock up of a self indulgent, drunken, licentious eighteenth century nobleman set on a plinth like a statue, the personification of self aggrandisement, middle finger in the air. Sculpted from wax, foam, steel and paint this filthy individual seems to be covered in faeces, certainly bird droppings in the manner many real-life statues are similarly defaced but in this case it seems this King is the dumping ground of all dumping grounds. And er hum..stand a little further back and the whole thing looks like a symbolic lump of faeces fashioned as a statue and not the other way round, that’s how vile it is. It depicts the dissolute nature of noblemen and the upper classes in ages past and literally defecates on their legacy. It almost seems to be screaming ‘no matter what the history books write or what’s inscribed on the statues this was what it was really like.’ As regards this particular individual anyway. 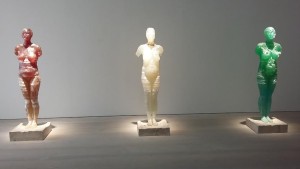 A colleague of mine remarked that Maria Kulikovska’s life-size natural soap sculptures titled Homo Bulla look like giant jelly babies. They do but you can see why they are one of the galleries favourite exhibits with crowds lingering longer here than elsewhere. The three of them are almost like traffic lights. Close enough in colour, one red, one green, one an off-white neutral shade. And people stand to attention accordingly, responding subconsciously to the colour commands as if on autopilot at a traffic intersection. Also they are simplistic and pleasing to the discerning eye, as close as you can get to the Greco-Roman statues we universally regard as beautiful art without lazy pastiche. You see these ones have no arms in the same way as a lot of those Hellenic treasures that have survived hundreds, even thousands of years with a limb missing here and there. But you could not call these beautiful. Personal is a better description. Lined and gouged with the abrasive yet intricate craft of a narrator who wants you to do all the talking and thinking.

UK/raine: Emerging artists from the UK and Ukraine runs from  November 23 –  January 3, 2016 at The Saatchi Gallery. Opening hours are 10am-6pm everyday with free entry.