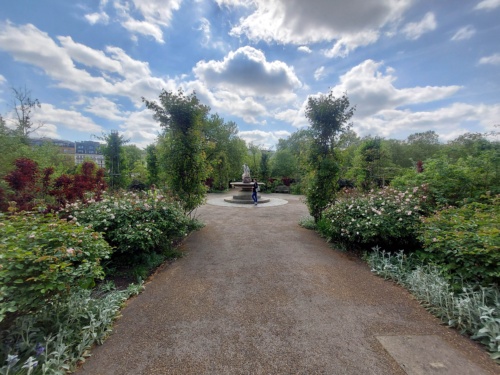 The sun’s out at last and its tentative appearance will have much more fanfare in mid-May when temperatures are expected to rise significantly. And how better to reconnect with nature and enjoy London’s attractions than by taking that Royal Park trek through St James’s Park, Green Park, Hyde Park and Kensington Gardens.

These are, what we’ll term, the Right Royal! parks surrounding the royal residences, although there are other royal parks across the capital. This description, at least, helps with that distinction. For all you sightseers, these parks are within easy reach of tributary attractions in Westminster and Kensington such as Big Ben, The Houses of Parliament, Westminster Abbey, Buckingham Palace, Wellington Arch and Kensington Palace. 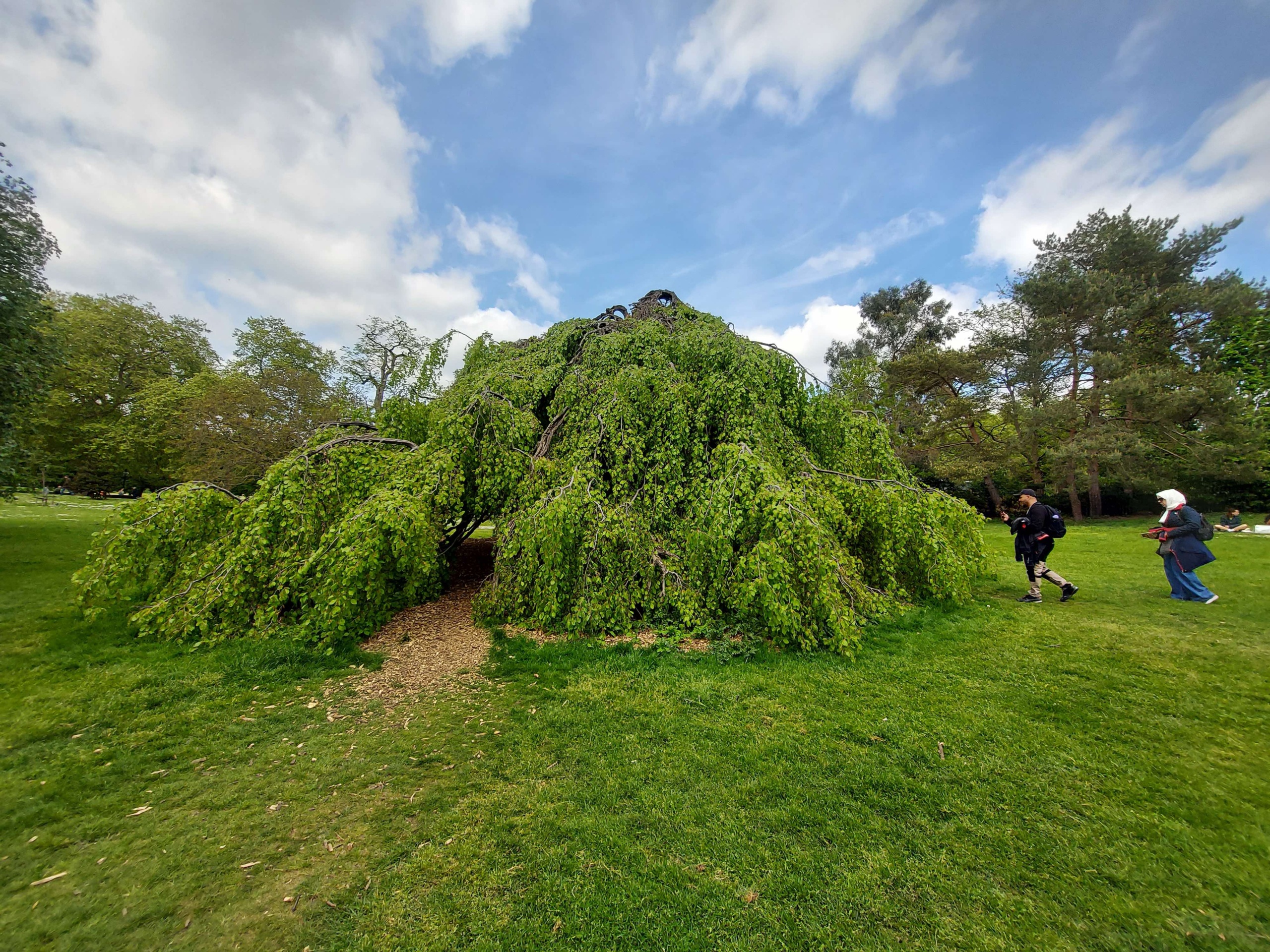 But more importantly, you get to ramp up your healthy DNA by walking (a considerable distance!) in nature. You may have heard that people who walk often and quickly have more anti-ageing DNA than sofa-slouchers. And walking is linked to a reduction in cancer rates.

Also, walking in nature has other scientifically-proven well-being and health benefits. Did you know that trees give off a chemical which boosts your well-being, and lowers blood pressure? Well, you’ll soon find out for yourself on your summer trek through London’s ‘Right Royal’ Parks.

So this is the big one taking you through hundreds of acres of greenery and all four parks in one day. Are you ready for the challenge!

Your Summer Walk Through The Royal Parks 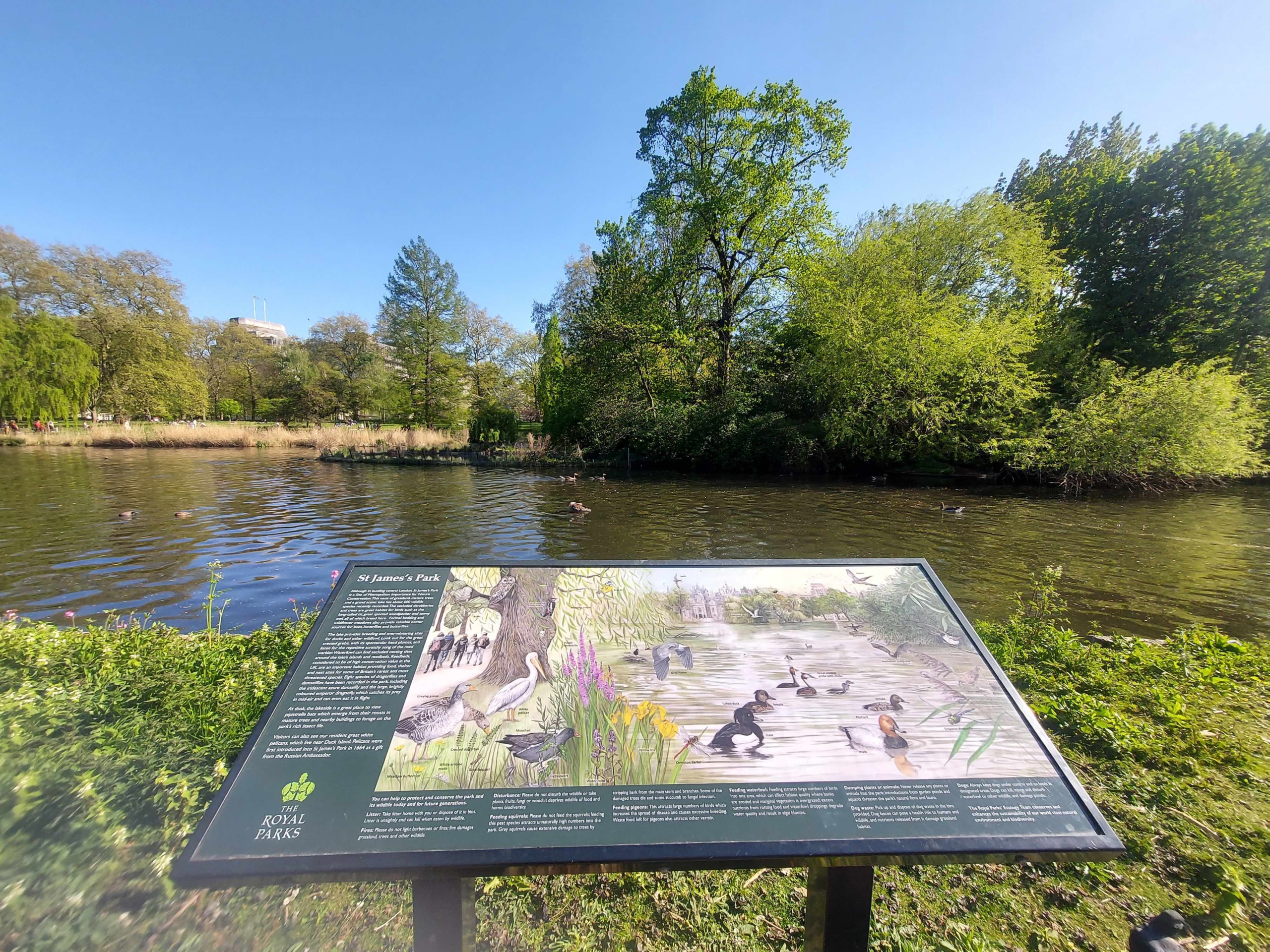 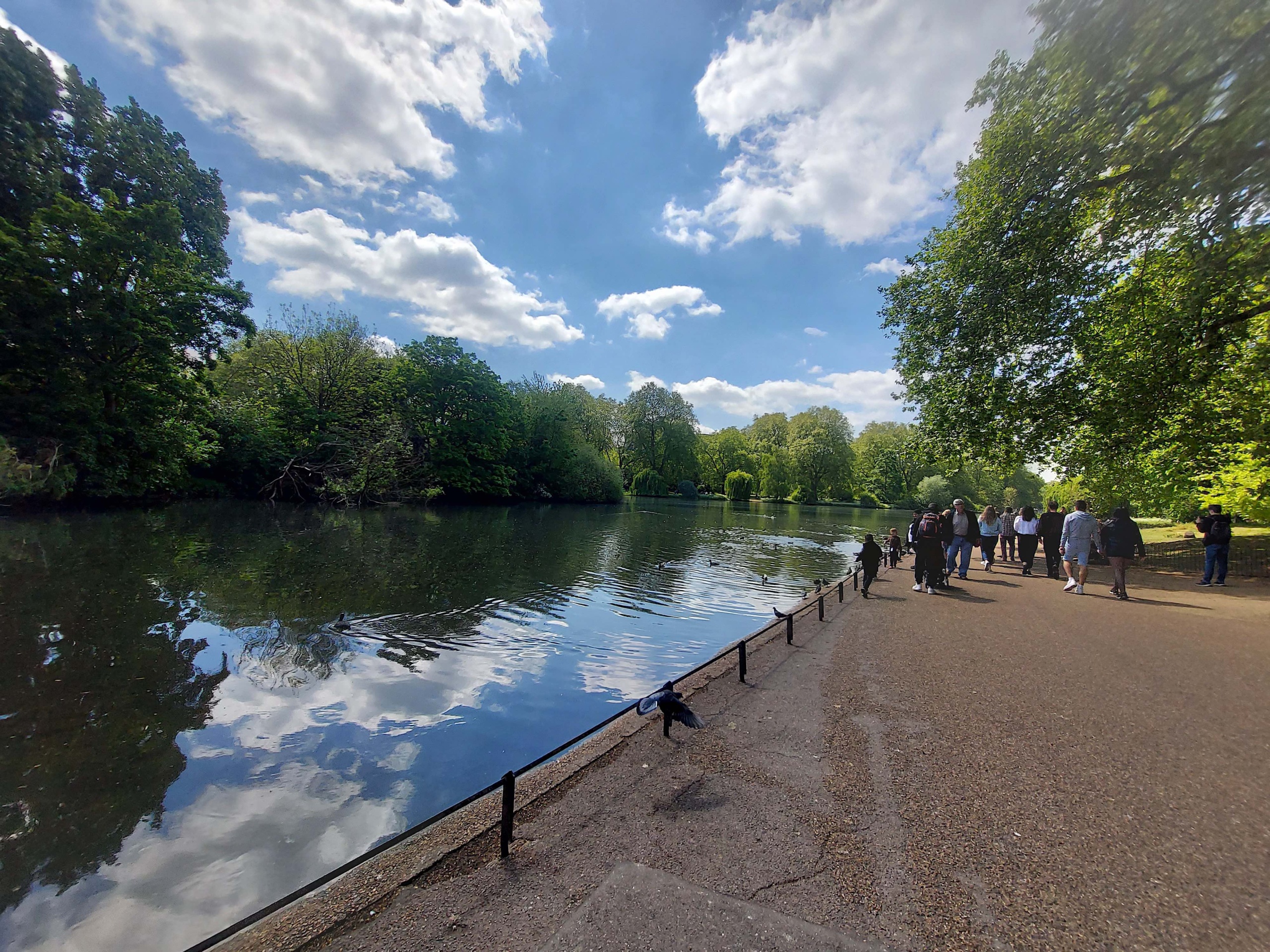 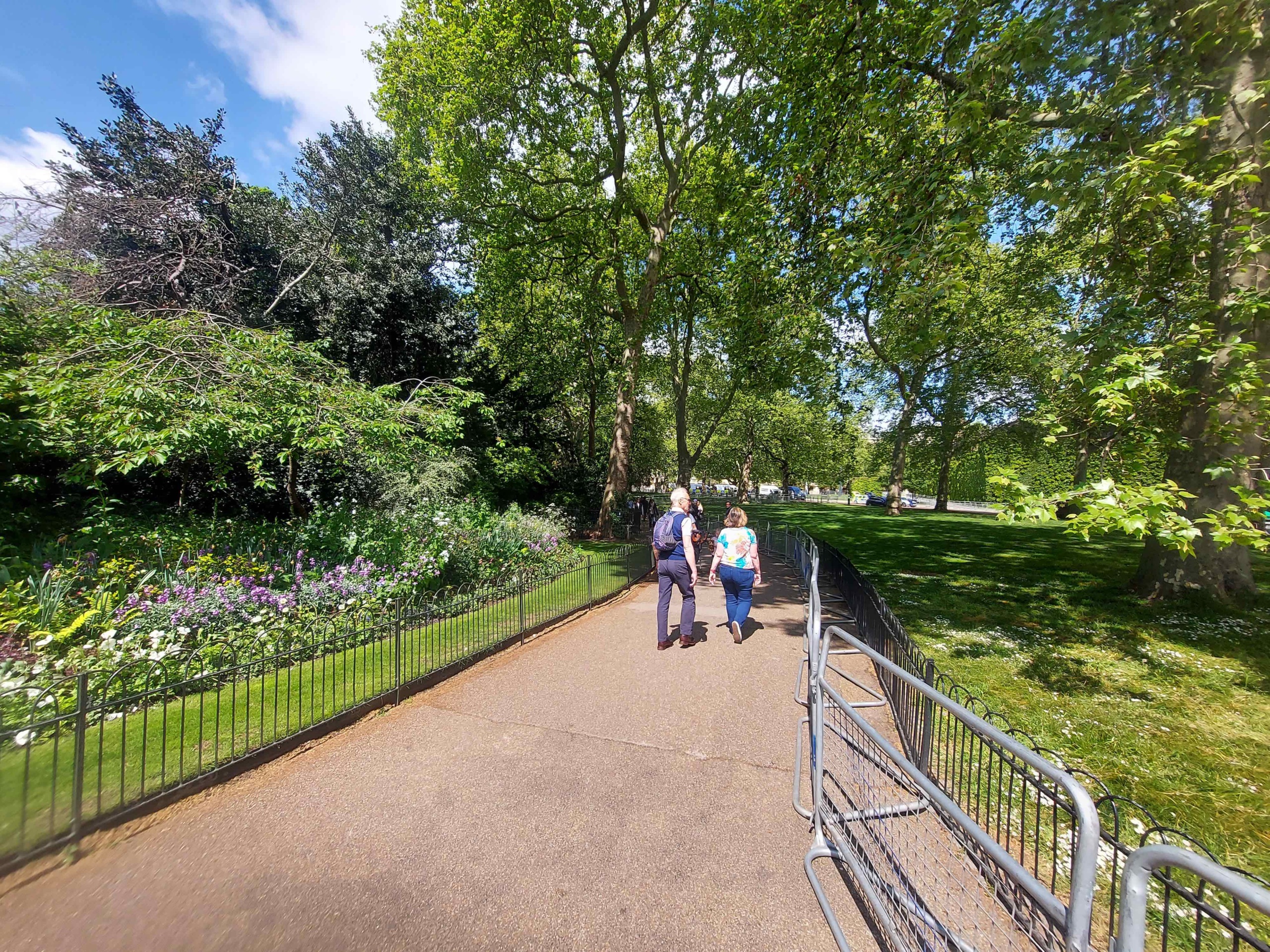 History From a marshy watermeadow in the thirteenth century to Henry VII”s deer park in 1532, this site has undergone notable transformations. However, it was King Charles II who opened up the park to the public and took the landscape design to a new level. Its look today is down to architect John Nash (1752-1835) who was invited by the Prince Regent to introduce natural forms and create an idyllic landscape.

Duck Island Cottage is a Swiss-style chalet built in 1841 for the park’s birdkeeper. The Ornithological Society of London oversaw the construction and once had a dedicated meeting room there. The society helped look after the geese and ducks. Storey’s Gate Cafe on Birdcage Walk was also a birdkeeper’s residence occupied by King Charles II’s ‘Keeper of Birds’ Edward Storey. The cafe there today bears his name – it’s on the corner of St James’s Park and has outdoor seating with picturesque park views. 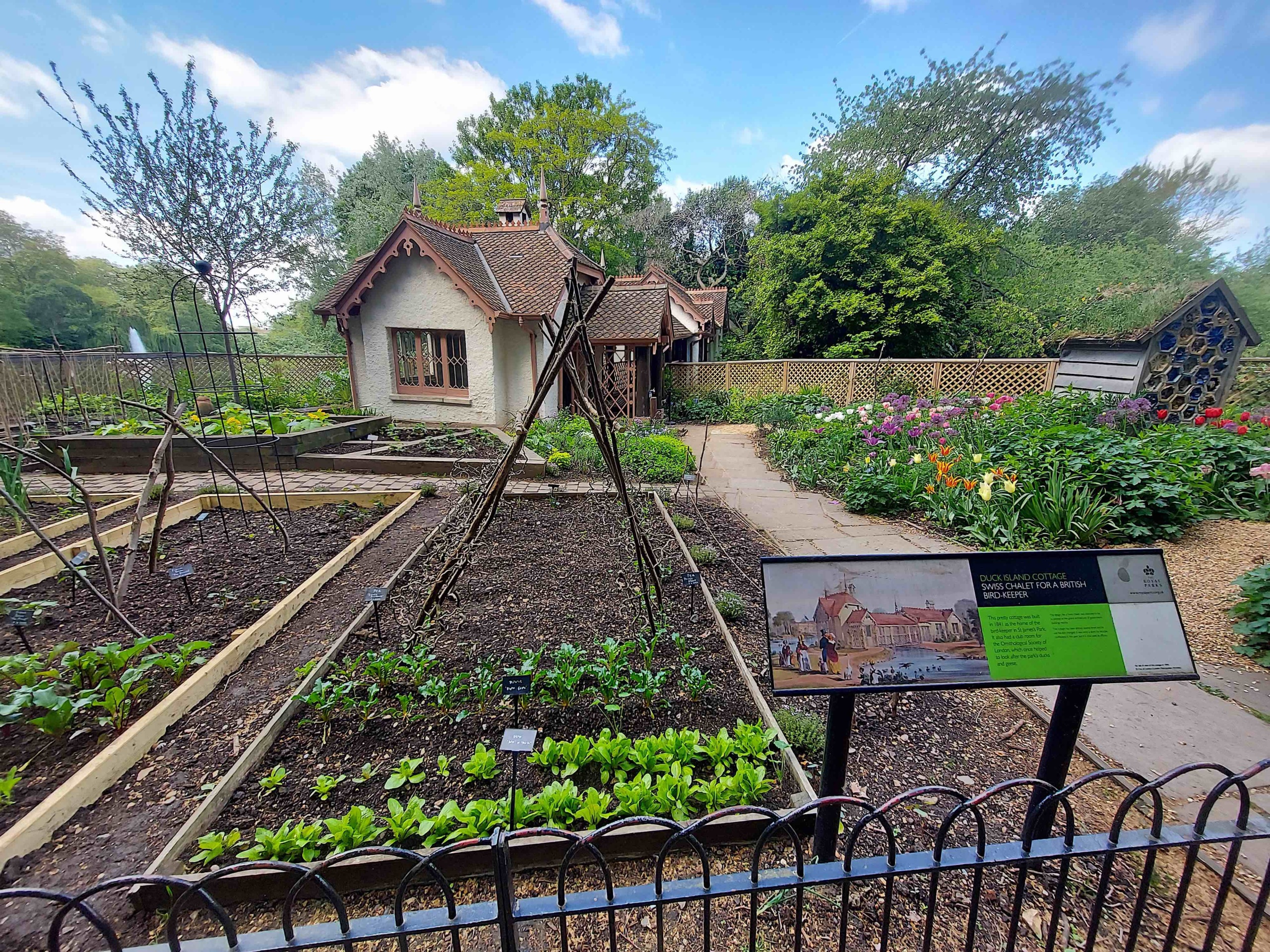 Look out for the different bird species such as the eastern white pelicans. They were first gifted to King Charles II by the Russian ambassador in 1664. This magnificent bird is not easy to miss as it has the second-largest wingspan of all birds. 40 pelicans have now made St James’s Park their home. Pelican Rock on St James’s Park Lake is their designated gathering space. Also, ducks, geese and swans are a common sight around the lake.

Landmarks such as Parliament Square, Westminster Abbey, The Mall and Buckingham Palace are close by.

Statues & Monuments The Guards’ Memorial is just across the road, on Horse Guard’s Road. It was erected as a cenotaph to honour the fallen soldiers of World War 1 and sculpted from artillery captured during the war. 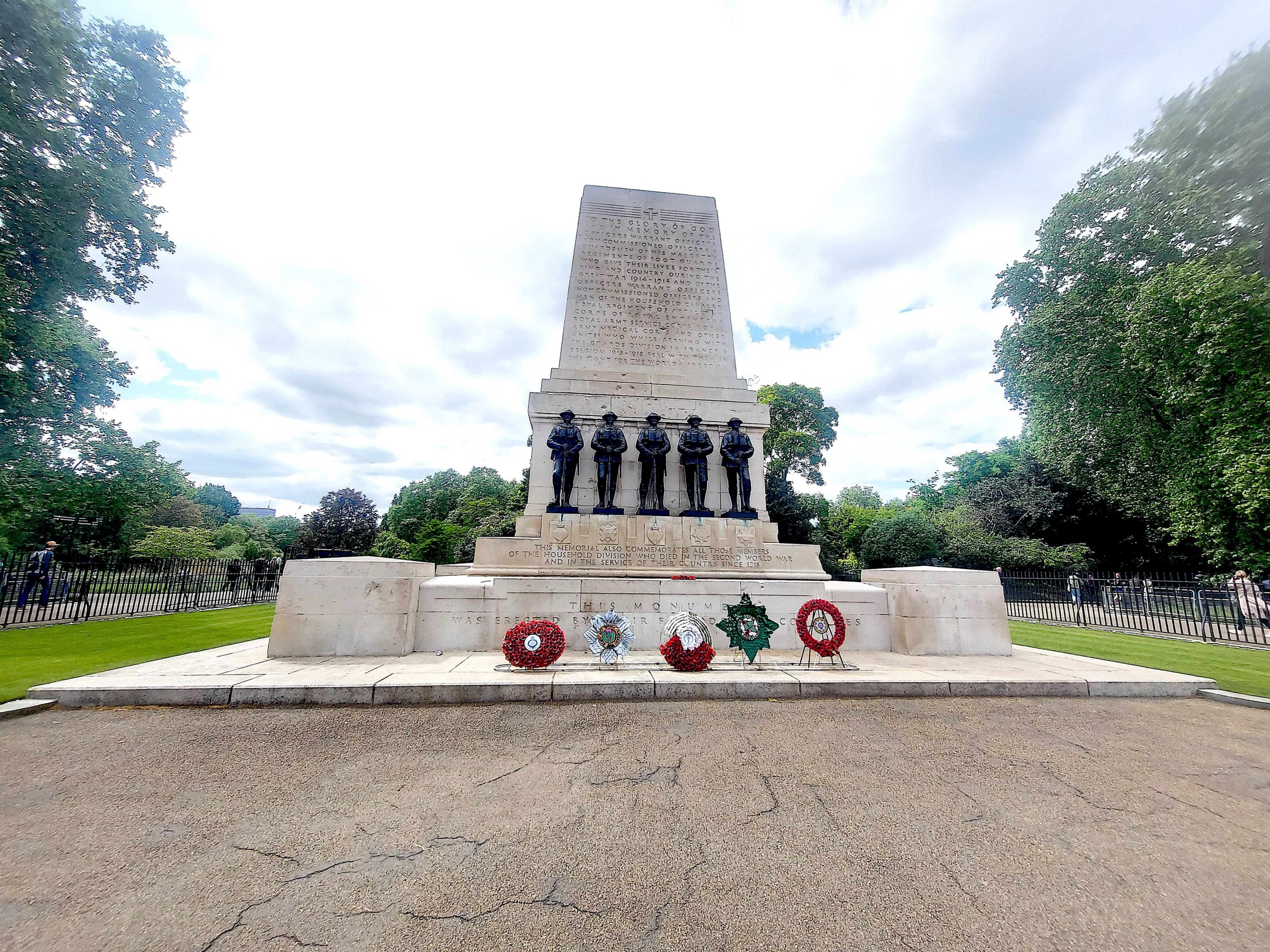 And from St James’s Park, it’s easy to get to Green Park, as the two parks are more or less opposite sides of Buckingham Palace and separated by The Mall. 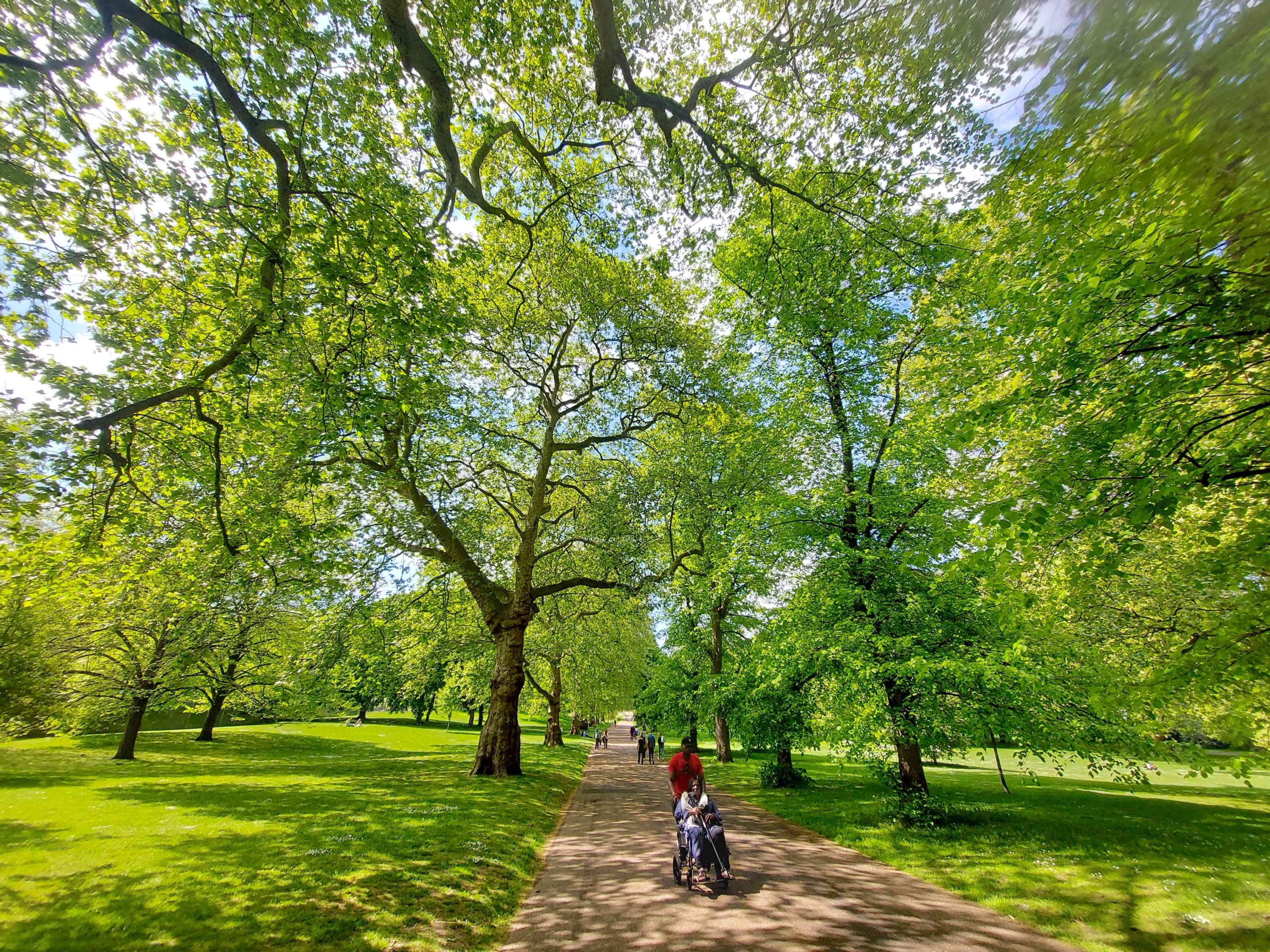 History In the 15th century, it was a meadowland known as Upper St James’s Park and home to royal deer. In 1668, King Charles appointed a ranger and fenced it off from the public. In 1746, it became Green Park and visitors flocked to its fashionable reservoir the Queen’s Basin, which no longer exists.

Look out for The ornate and magnificent Canada Gates which open out into the vicinity of Buckingham Palace. They were gifted by Canada to Queen Victoria when it was part of the Commonwealth. Also, you’ll notice scenic tree-lined paths that seem to go on forever – and a constant stream of red-faced joggers. 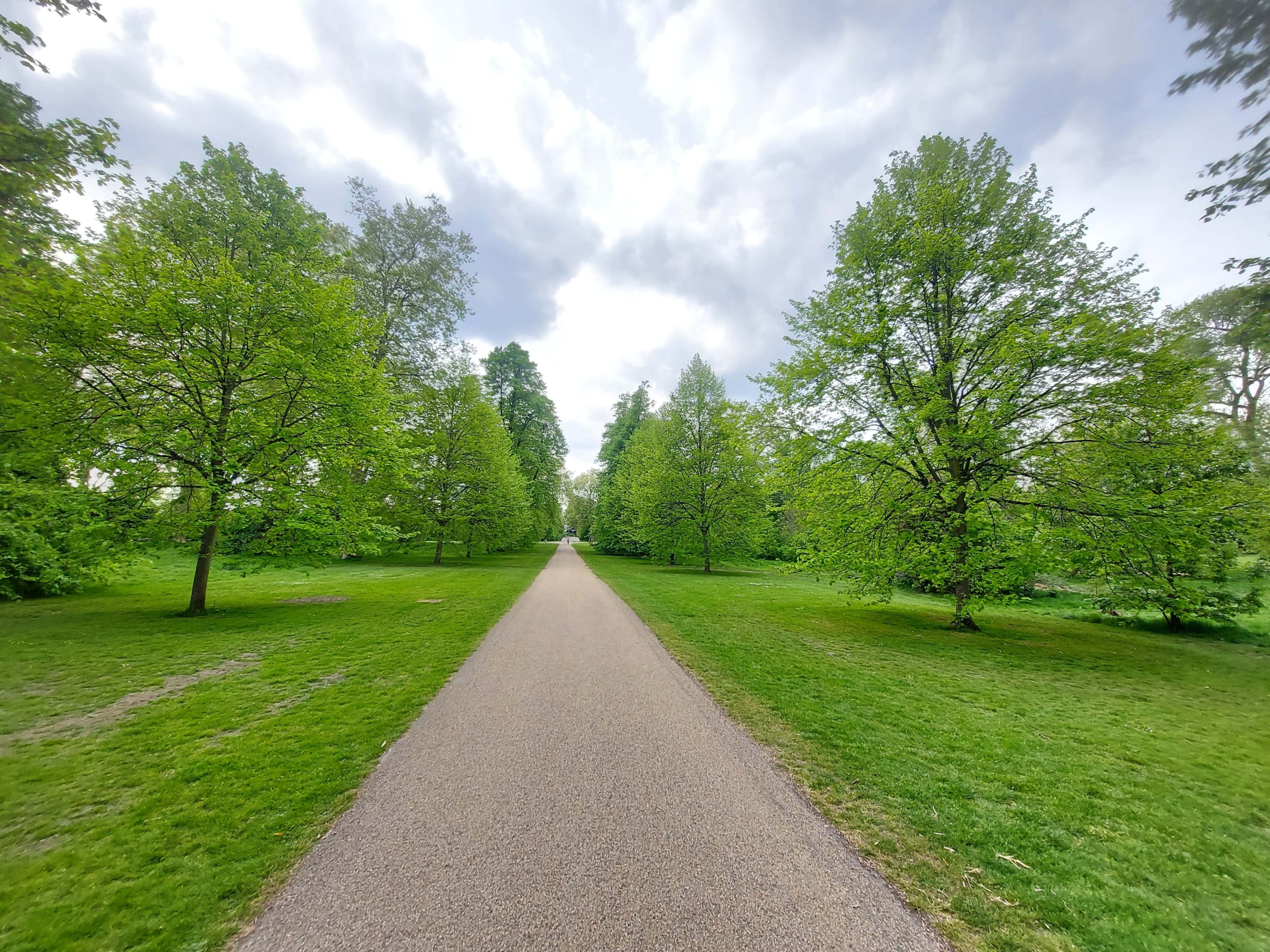 Statues & Monuments The Canada Memorial is a marble and bronze monument with an elegant water feature. It remembers the Canadian soldiers of the two World Wars. At the Wellington Arch end of the park, you’ll find the Bomber Command Memorial which commemorates the 55,573 soldiers of RAF Bomber Command who lost their lives during the Second World War. 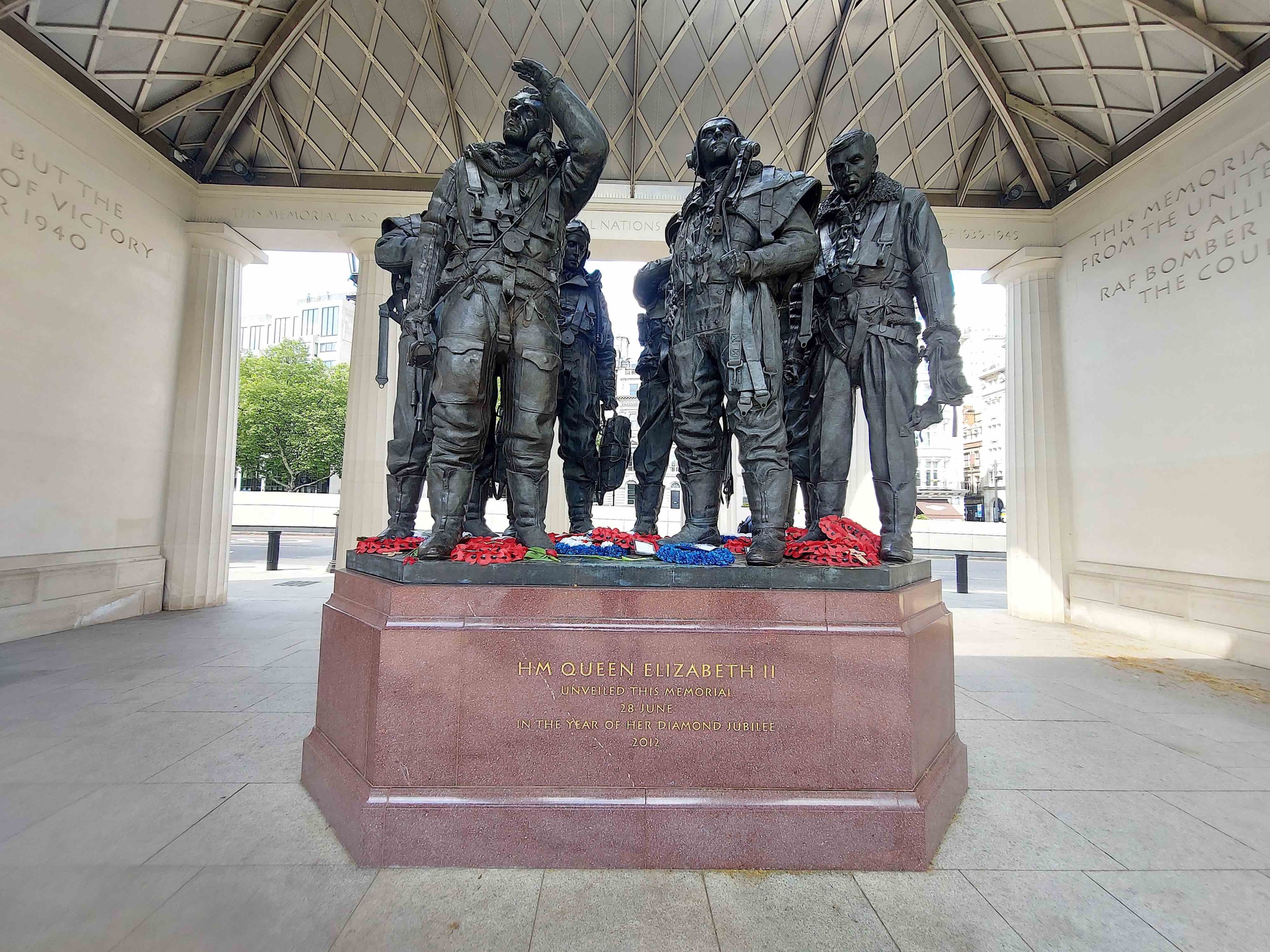 Also in this vicinity, at the top of Constitution Hill, you’ll find the Commonwealth Memorial Gates. These stone pillars mark the contributions of the five million soldiers from Africa, the Caribbean and the Indian Sub-Continent during the two World Wars.

It’s a short walk from Green Park to Hyde Park through Wellington Arch, a monument to the Duke of Wellington. You can also find his statue here and the Machine Gun Corps Memorial Figure of David, the New Zealand Memorial and the Royal Artillery Memorial. 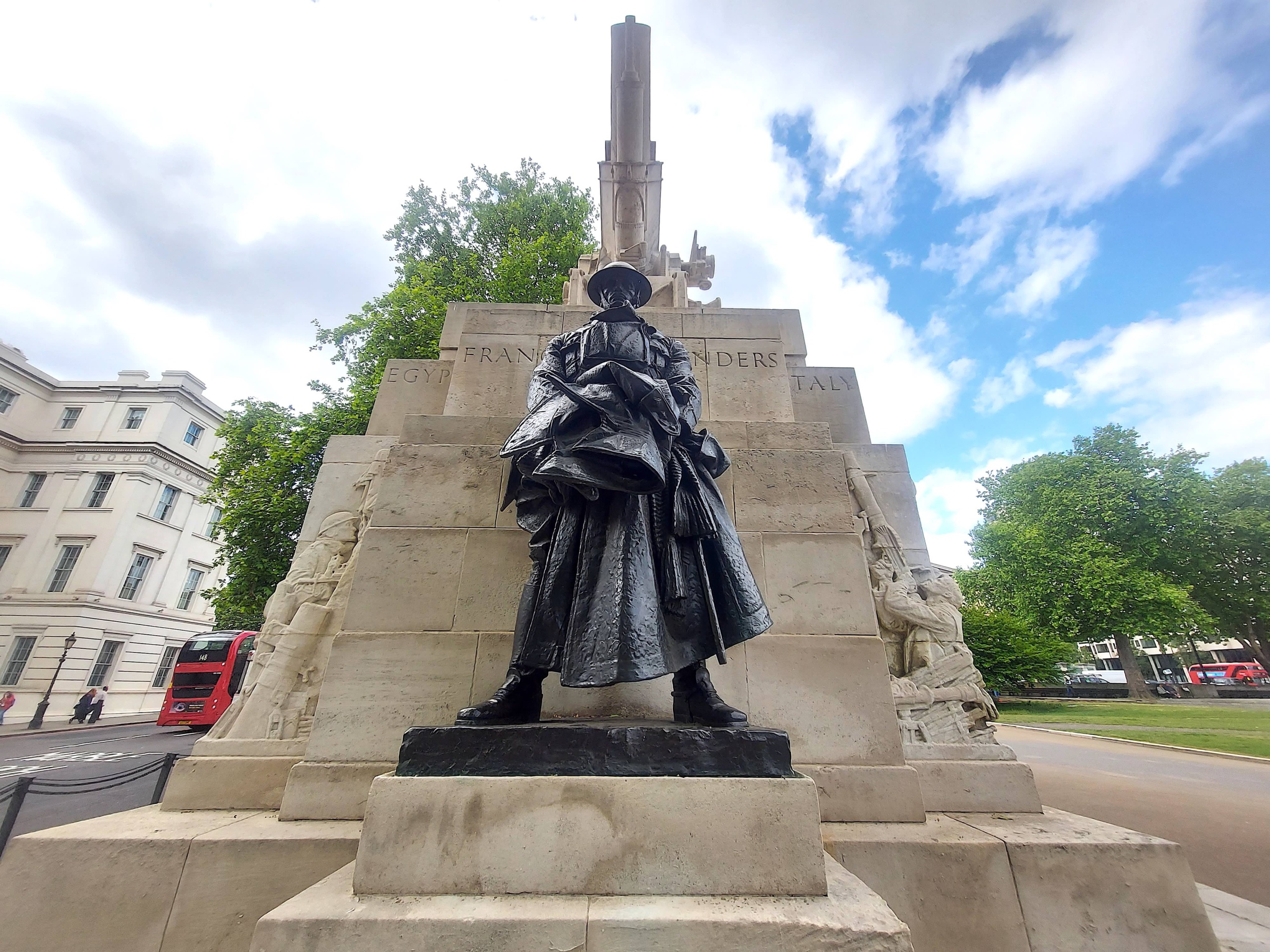 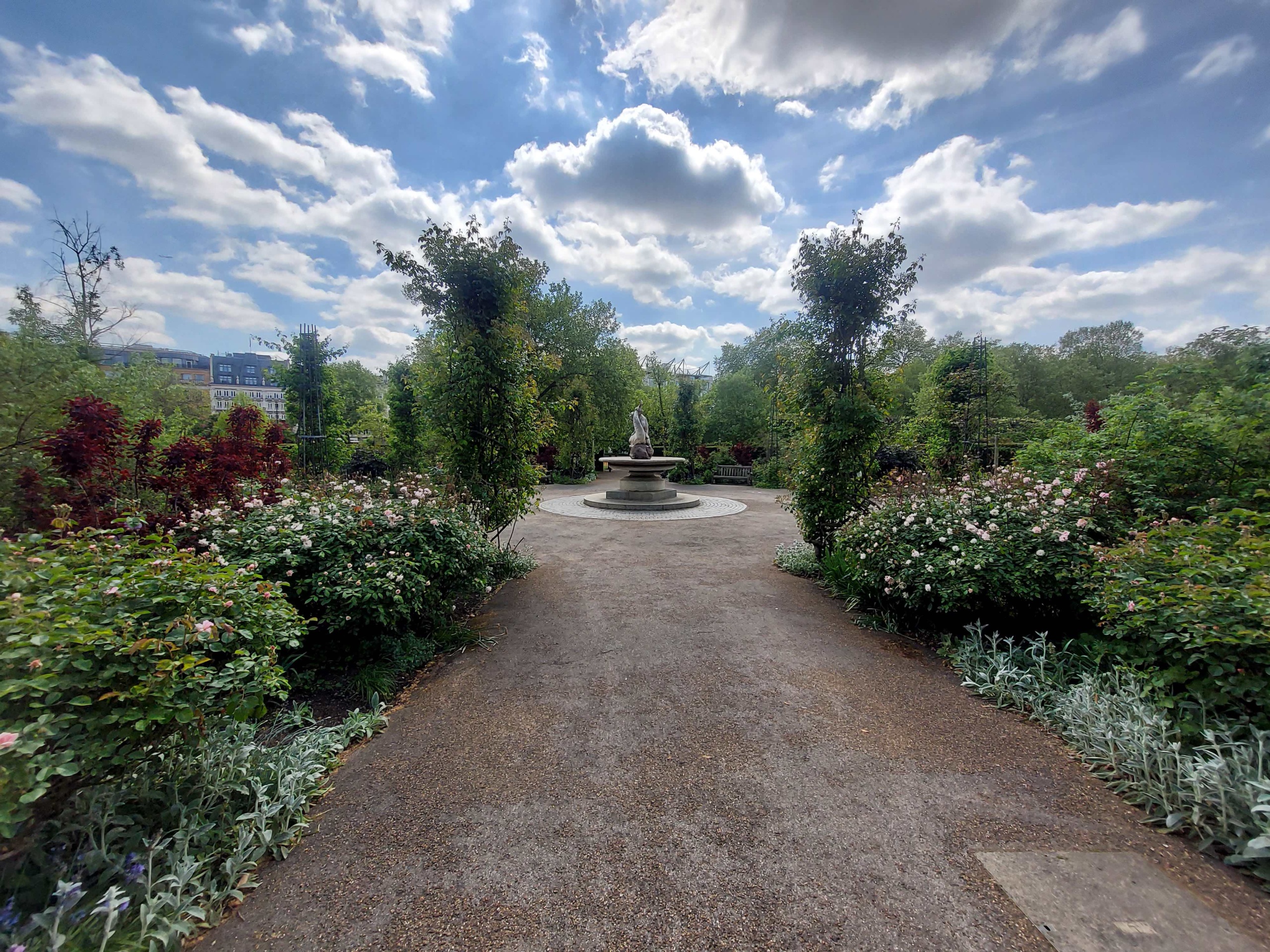 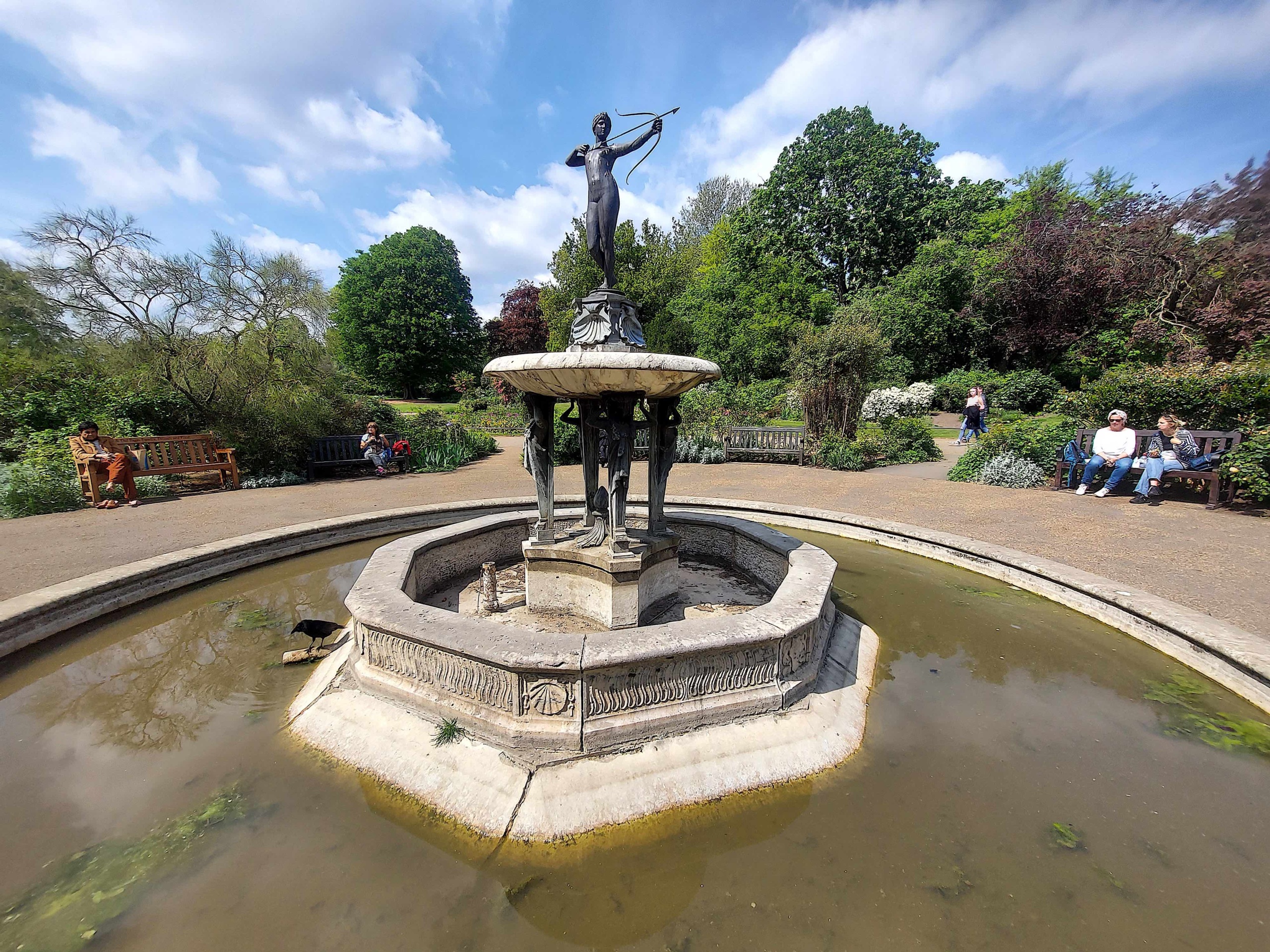 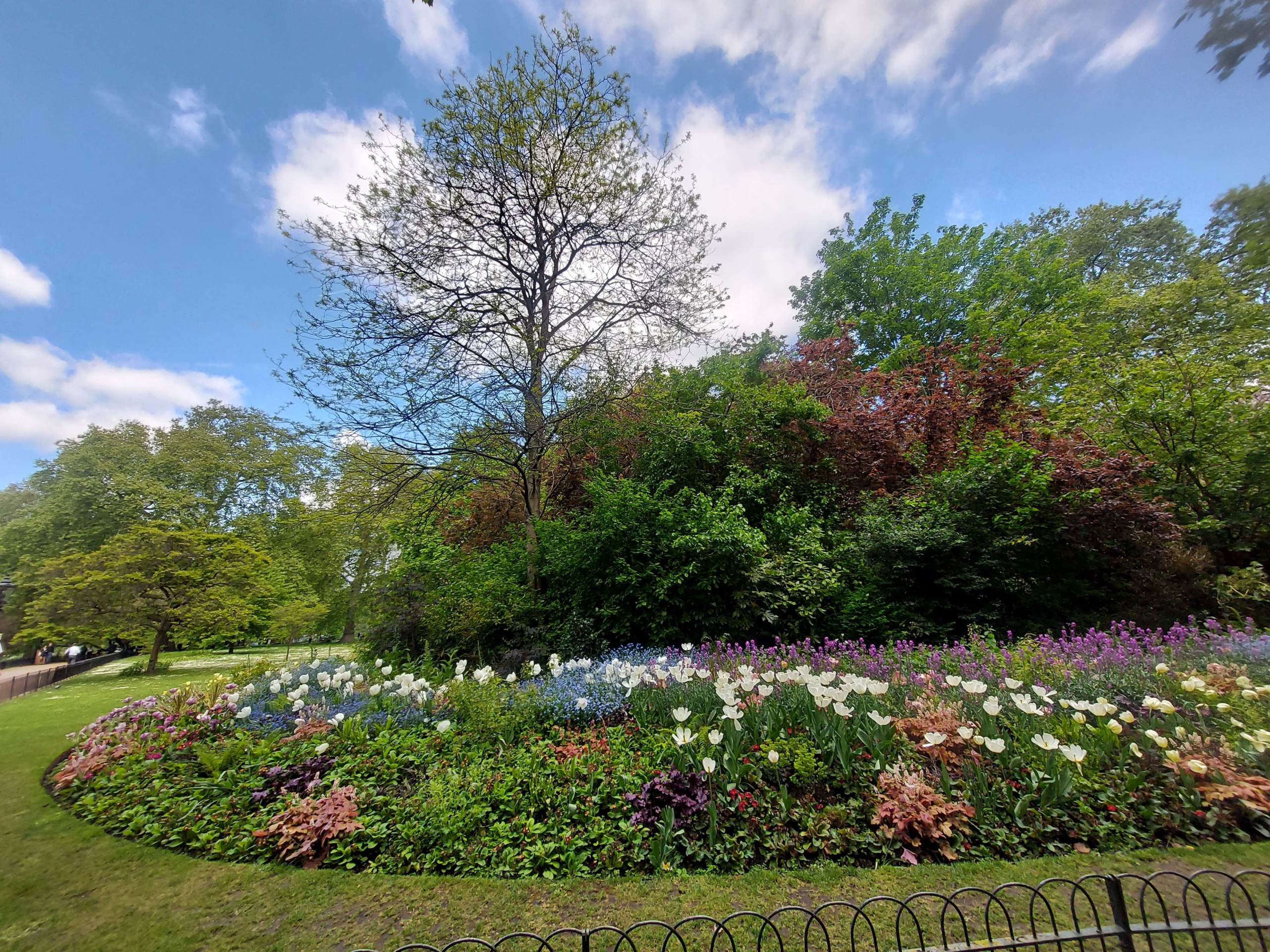 History During the English Reformation, Henry VIII seized the grounds of Hyde Park from the monks of Westminster Abbey. It became his private grounds for hunting deer but in 1637 King Charles I opened it to the public. The Serpentine Lake was created in 1730 under the auspices of Queen Caroline, wife of King George II.

Look out for the Rose Garden, not too far from the Hyde Park Corner entrance. And the Serpentine Lake is a popular attraction because of the boating, the enclosed Lido, and the cafe overlooking the lake.  If you’re having your cappuccino on the terrace, look out for the waterfowl nesting on the water’s surface. Speakers’ Corner is a popular spot for political rants which can often get quite heated. 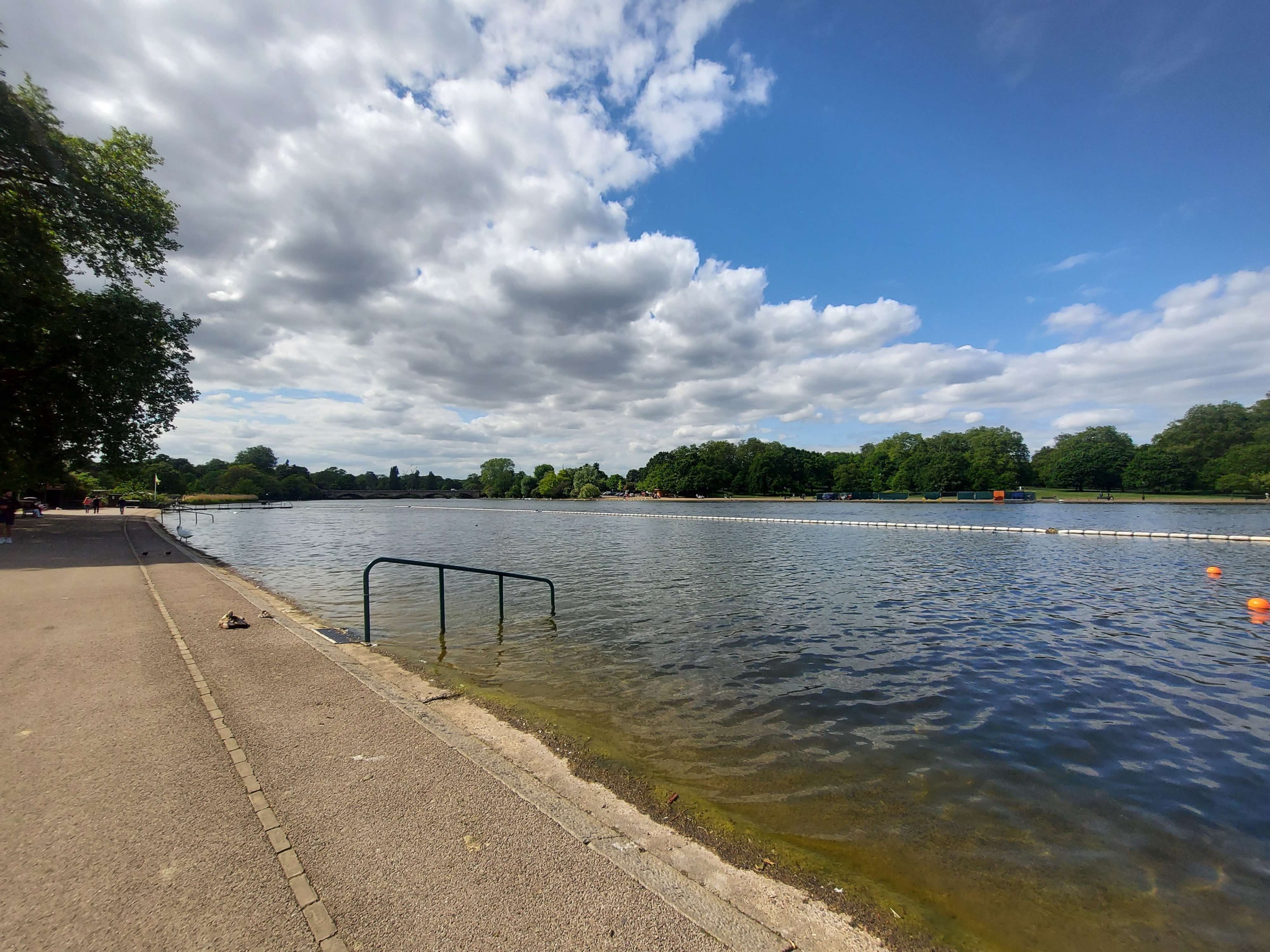 Statues & Monuments There’s a majestic bronze statue of Achilles near the Hyde Park Corner entrance and the Princess Diana Memorial Fountain is found close to where the park meets with Kensington Gardens. 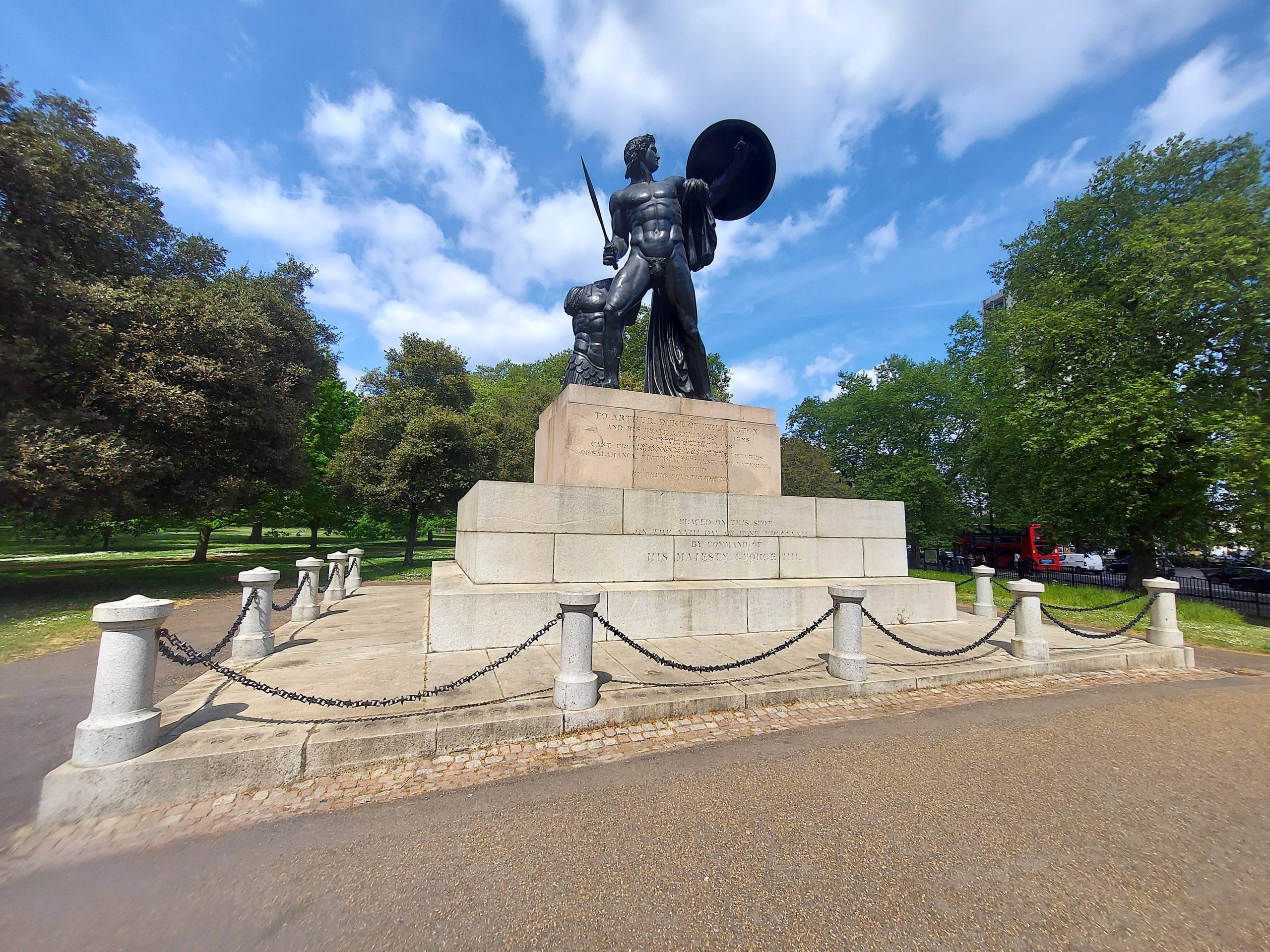 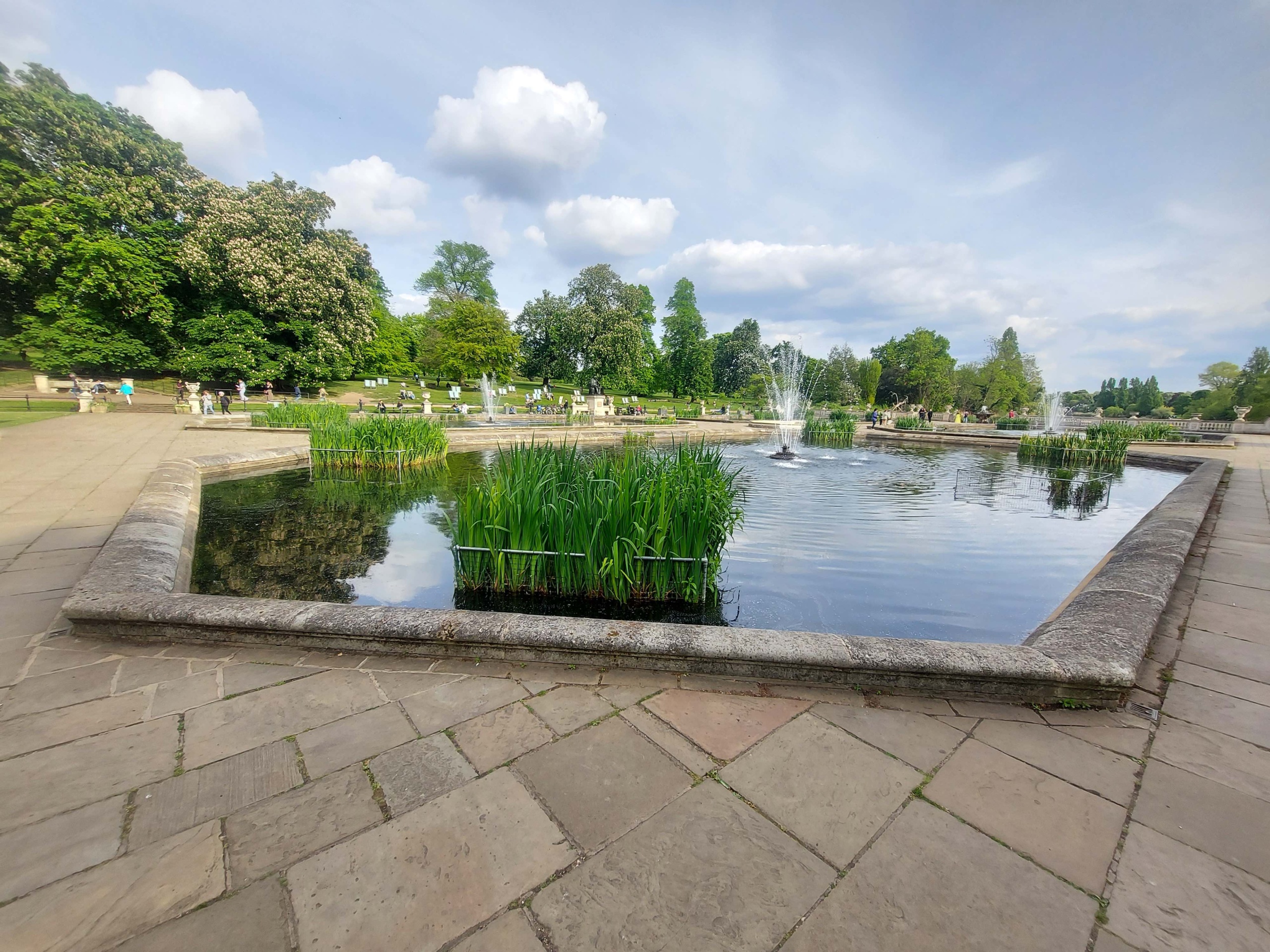 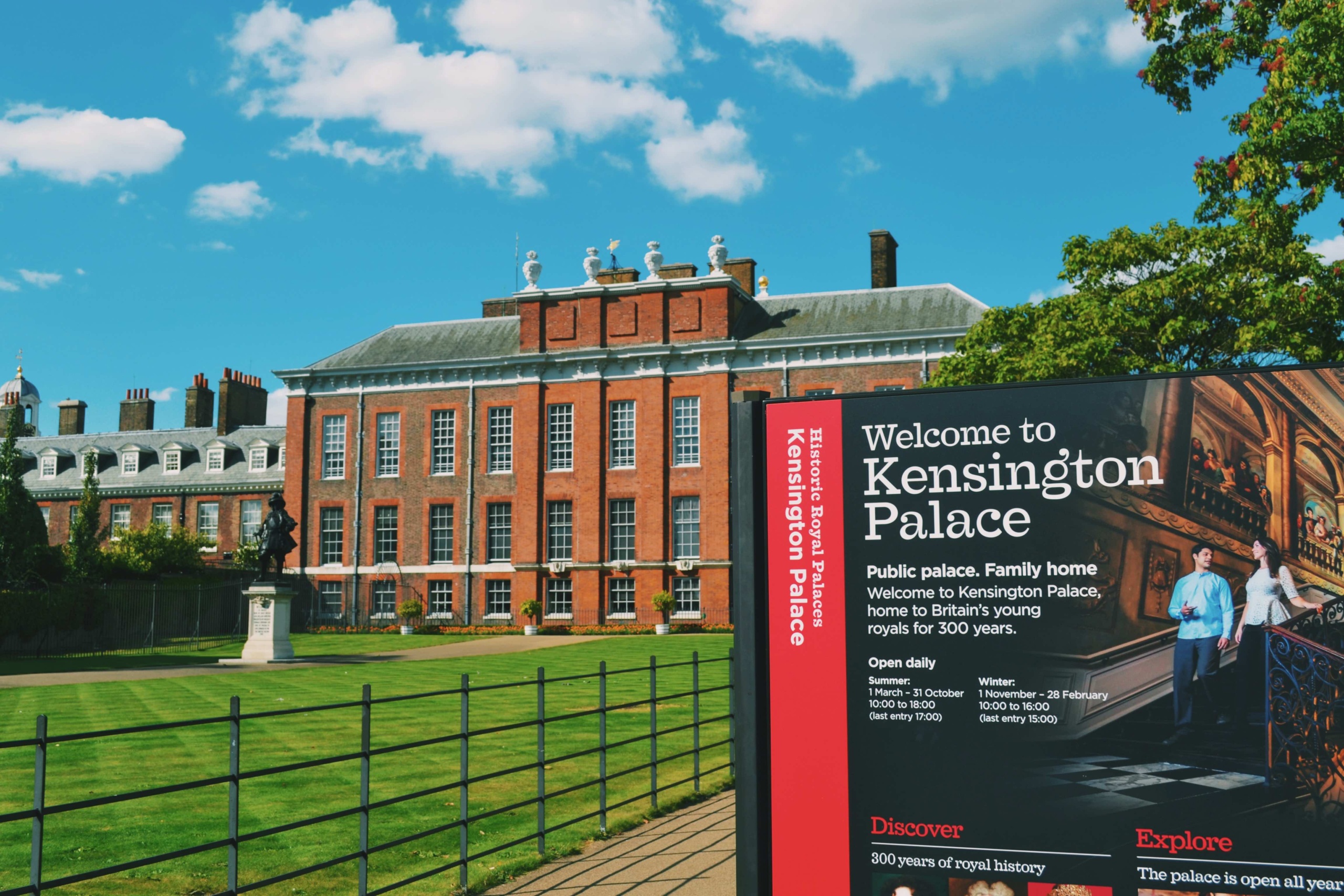 History Kensington Gardens was part of Hyde Park during Henry VIII’s reign. The separation of the two began in 1689 as work began on a palace garden. In 1730, Queen Caroline authorised the construction of the Long Water stretch of waterway and Round Pond.

Look out for the two Serpentine galleries, also the Italian Gardens (Prince Albert’s gift to Queen Victoria in 1860). And, of course, Kensington Palace.

A landmark sculpture by Henry Moore known as The Arch is a must-visit. This monumental piece is based on a human bone but brings to mind the neolithic Stonehenge blocks and arches of triumph from centuries past. 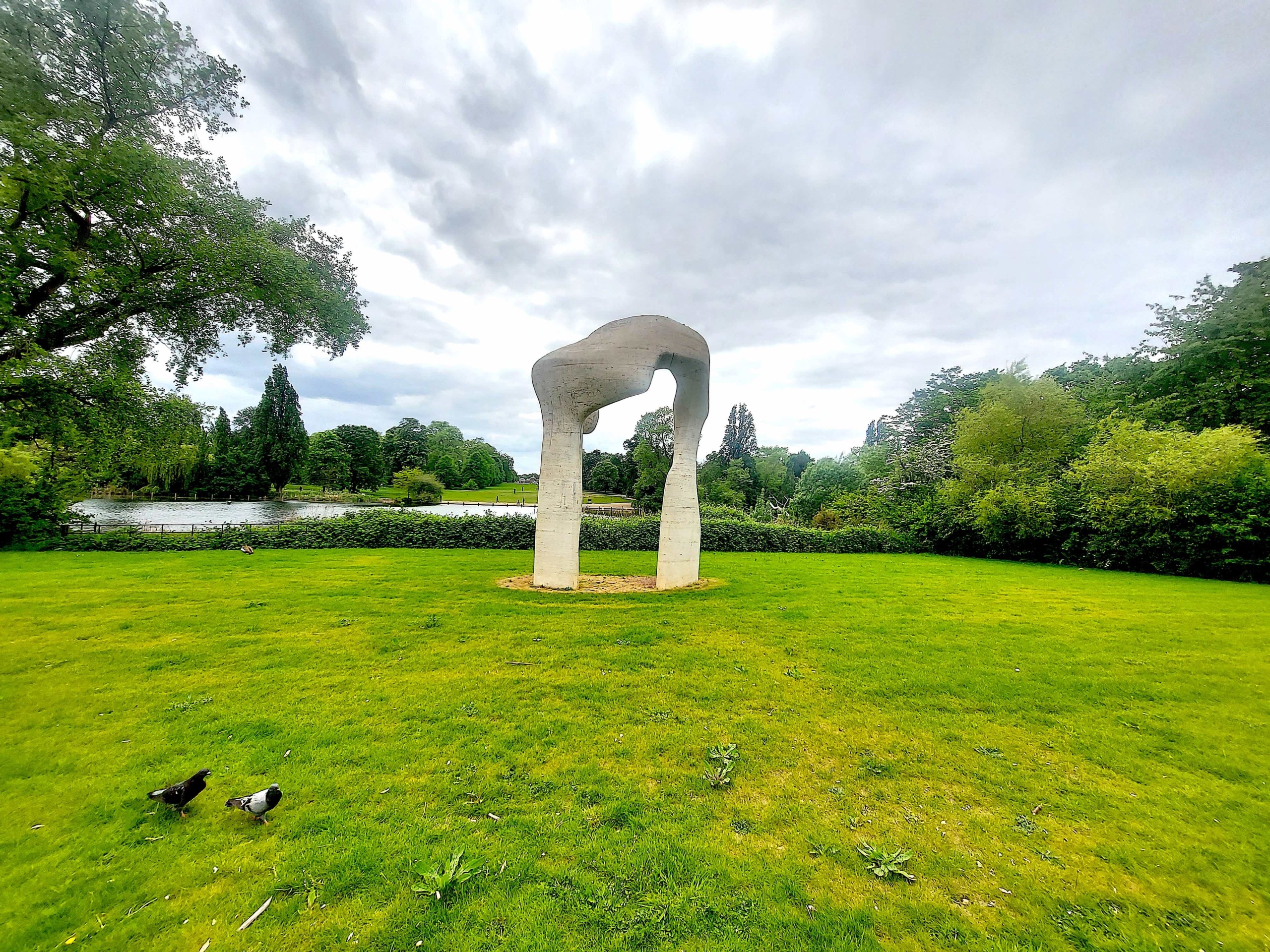 Statues & Monuments There’s a bronze Peter Pan Statue close to the Diana Memorial Playground. It was commissioned by Peter Pan creator J.M Barrie in 1912. Also, the Diana Memorial Garden – the White Garden – is close by and located in the grounds of Kensington Palace. It was formerly the Sunken Gardens, which were created in 1908 and a particular favourite of Diana’s.