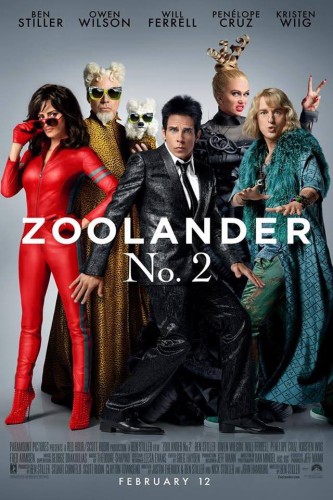 After 15 years the sequel to the cult classic has finally arrived. Many fans are scared it won’t hold up as many sequels do, but it does. Zoolander 2 is a silly film that will make you laugh out loud. The expectations were high and unless you rigidly compare it to Zoolander 1, you will enjoy it.

The film opens with flashy lights and loud sound effects and brings you up to date with a fast paced montage of what has happened to everyone in the last decade and a half. Derek’s (Ben Stiller) school for Children Who Can’t Read Well collapsed, killed his wife Matilda (Christine Taylor) and disfigured Hansel’s (Owen Wilson) face. The authorities take Derek Jr (Cyrus Arnold) away after Zoolander fails to cook pasta and generally failed to be a responsible Dad. Mugato (Will Ferrell) is in prison for the insane, plotting revenge on Zoolander.

The plot begins with Justin Bieber being killed. As he dies he manages to take a selfie doing an expression Zoolander is famous for. Thus Valentina (Penelope Cruz) working for the Interpol Fashion Crime Section finds Zoolander and asks him for help to investigate why celebrities are being  killed, but Zoolander is out of fashion. He is called back from his self-imposed isolation from a society in the northern part of New Jersey to be whipped by All (Benedict Cumberbatch) at a fashion show in Rome. Hansel is also brought back form the uncharted part of Malibu and receives equal humiliation.

Their spirits are low, but when Derek Jr is in danger for being reincarnated as Steve, the ultimate male model (after God created Adam and Eve, he created Steve), Zoolander who wants to make good on his absence as a father and regain custody of Derek Jr, goes out to rescue his son. Legend has it that the heart of the reincarnated Steve will bring eternal youth to whoever has it and Derek Jr is the reincarnation of the ultimate male model.

And of course it is Mugatu who manages to kidnap Derek Jr and in an elaborate ceremony with cameos to the max (from Anna Wintour to Tommy Hilfiger and both Alexander and Vera Wang) has the child tied up ready to kill him to quench their thirst for eternal youth. Can Zoolander save his son?

The movie is overloaded with cameos. Even Neil Degrasse Tyson is in it somehow. There are so many cameo names being announced just to make sure you get it. Sting even gets his own name tag. Whilst it is absurd, it seems as though the film tries to take the mick out of itself by really overdoing not just the cameo bit but by being consistently ridiculously over the top. If this is your kind of humor you have found a great movie to watch. Again nothing in this film takes itself seriously or pretends to do so. The Zoolander Universe is a funny, but non-sense one.

Ben Stiller, who has directed this film also played well on recurring jokes in the film, such as Mugatu spilling his hot latte on his PA, but  always manages to advance the joke, play with your expectations and add something. Zoolander 2 feels bolder and tries to push some jokes further than in part 1.

The movie has little plot, but did the first one?It has well composed sketches played out in an unrealistic world. Just let go of your preconceptions and you will laugh. The characters stay consistent with the first one. Stiller takes more risks with jokes, some pay off, some not as much, but all in all, it’s a worthy sequel.