Costa Book Awards: Inside the Wave named Book of the Year 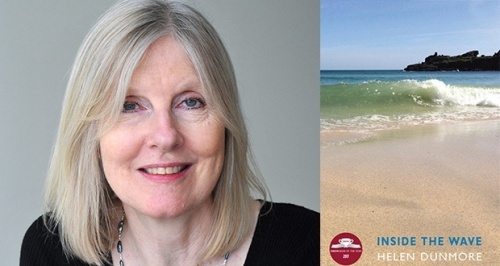 Review of: Inside the Wave (Book)

Helen Dunmore passed away from cancer in June 2017 and her Costa Prize-winning book of poems Inside the Wave touches upon her illness, mortality and the bridges between the worlds of the living and departed. It has the reflective air you might expect from one on their deathbed but with a contemplative flow that both jars with its transparency and intrigues with its nebulous rhythm. On closer inspection, this novelist-poet inflects her verse with the un-rhythm of the mind with all its wondrous free-flowing perceptions, unshaped language, careful remarks, mumbles and cross thoughts.

The opening poem Counting Backwards focuses on the working environment of an anaesthetist, leaving you in no doubt about her typical concerns and daily life. However, the gently ironic cadence in this first poem is not there to highlight the clinical nature of illness and death, despite the talk of cannulas. Sound is underscored. Yes, even the sound of a decorative waterfall in the ante-room. Cadence is provided by her layered and nuanced observation of their working lives and these sounds surrounding them. Ultimately, it is a conversation about her own mortality without openly broaching the subject.

The titular poem Inside the Wave embraces some elements of her skill as a novelist. There’s a sense of story telling as she shares the lives of seamen docking after voyage’s end.

And when at last the voyage was over

The ship docked and the men paid off,

The crew became a scattering

In houses along the hill top

Where the lamps flared in welcome

And then grew dim, where a woman turned

As from habit to the wall.

In this same poem we have the first introduction to the sprinkling of Greek mythology throughout her work. Despite his classical heritage Odysseus does not stand out amongst the other seamen for his charm or looks but there’s bags of character beyond those ‘barnacled lips’.

His toenails were goat’s hooves.

His hair a wild

But it’s the reference to Elysium in her poem Place of Ordinary Souls that intrigues. Elysium was a sort of warrior’s heaven for dead Greek heroes; an afterlife resting place which lay well beyond the Asphodel Fields reserved for those who lived unremarkable lives. Considering her remarkable literary career, which included prizes for both poetry and fiction and culminated in her becoming only the second person to posthumously win a Costa Book Award, where did Dunmore place herself?

In the fields of asphodel we dawdle

Towards the rumour of a beauty spot

Which turns out to be shut

The bus shuttles all day long

With its cargo of ordinary souls

We lie on our backs, eyes closed.

Tagged with:     Inside the Wave