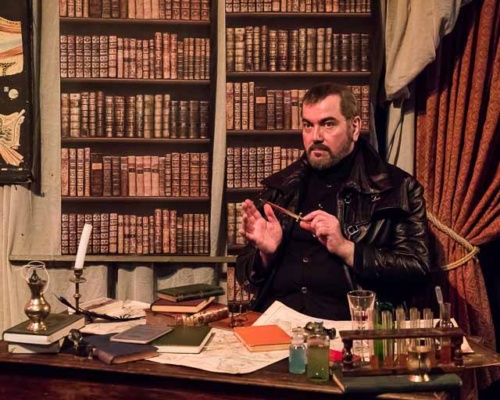 Most are familiar with Christopher Marlowe’s play and the seven deadly sins which haunt Doctor Faustus in this Elizabethan tragedy. Few may be aware that Faustus is described in the traditional Chorus as being from ‘base stock’ and later a physician and professor of divinity at Wittenberg University. Even then, his undeniable thirst for greater worldly knowledge leads him to summon the demon Mephistopheles and leads to the Faustian pact with Lucifer.

The Tower Theatre Company tackle his tormented spiritual journey with enough of a modernist tilt to stay true to Marlowe’s vision but one wonders what the great Marlowe would have made of the deadly sin of Lust characterised as Benny Hill. Actually, Benny Hill in a leopard-skin mini skirt leering and salivating all over Faustus after the Seven Deadly Sins strut out on stage as if it were a fashion show: led by a white-turbaned, red-lipsticked, incredibly camp Pride who’d make John Inman pale in comparison.

Are You Being Served? You will be because Lucy Bloxham’s direction offers a clever take on the Faustian tragedy with lead actor Jonathan Cooper conducting this quest for limitless knowledge with an anguished and spirited performance which suggests a sliver of demonic possession even before the angels warn him of Lucifer.

Many of the cast play several parts, switching effortlessly as they do so. Notable in this respect is a scene where Faustus messes with the Pope. Faustus attends a papal feast and is invisible to the guests but intent on causing havoc. A good few of the clergymen around the table were also in earlier scenes in mini skirts, iPhone headsets and turbans when parading as the Seven Deadly Sins.

This, of course, doesn’t apply to Robert Reeve as Mephistopheles. His powerful presence and bassy tones are offered to Lucifer’s demon alone. The long leather jacket is a nice touch by costume designer Julia Collier. If Neo and Morpheus wore them in the Matrix when confronting the forces of evil and during their own struggles to tackle universal forces then the metaphor can be just as easily flipped here.

Ultimately, the uncomfortable relationship between science and religion in the Elizabethan era is examined. Science questioning everything, religion self-protective and the inevitable tension between the two. Also, the suggestion that anything outside the bounds of common knowledge must be dangerous until science or religion proves it otherwise safe. Like the Greek myth of Icarus or even Prometheus, it is a cautionary tale about knowing when to stop looking too deeply and be satisfied with who you are, what you have and what you know.

Doctor Faustus by the Tower Theatre Company at Theatre Technis