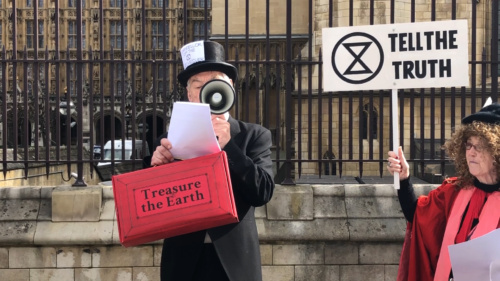 The all-important 2020 budget announcement on 11th March was significant for many reasons, the first since Brexit and for the newly appointed government. But before the announcement there was a little noise being made from protestors outside the Houses of Parliament.

Extinction Rebellion were among various other groups protesting, ahead of the announcement from the chancellor, as rebels demanded a stronger commitment to the climate crisis.

This was not only a budget that has needed adapting to account for the coronavirus, as economists expect it to halve global growth, but also the first budget delivered by Rishi Sunak as chancellor.

In the video you can see extinction rebellion set up a protest of this budget, with their own red briefcases to hand, calling for action to climate change once again. The most recently on International Women’s Day on Waterloo bridge and previously protesting the airport expansion of London City Airport.

They expect the climate change fight to last, but they want more action to be taken from the government. In 2019 the UK government committed to cutting emissions by 100% by 2050 but calls from protestors and scientists warn this may not be enough as by then it will be too late to combat it, with effects of climate change being irreversible by then.

The new budget sets out some environmental budgetary commitments which attempts to alleviate the climate crisis: