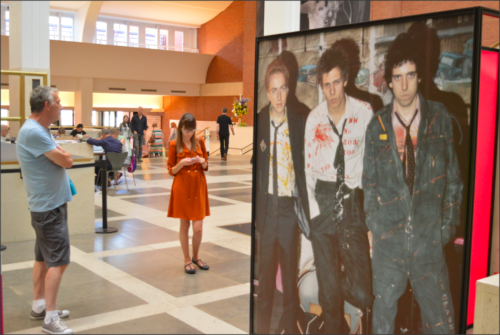 Punk was born on February 12th 1976 when the Sex Pistols had one of their typically anarchic, venom-fuelled gigs at The Marquee, Oxford Street. This exhibition at The British Library takes you back to those early days and the bands that launched a sub-culture that shocked the world. Punk svengali Malcolm McLaren’s input into the look and sound of the four piece outfit dominate the display. Black and white photos of the ‘Sex’ shop he setup in partnership with his fashion designer partner Vivien Westwood show them clearly in the driving seat of an uncompromising marketing machine.

Unsurprisingly, the ware they sold was designed to challenge public taste and acceptance just as much as the music. One of the T-shirts on display ‘Two Cowboys’ shows, yes, two cowboys, naked from the waist down standing facing each other, genitals touching. Sex shop assistant Alan Jones was arrested for wearing one while working! Also we are informed the shop faced many police raids during this period.

The Sex Pistols, of course, figure heavily throughout and there’s a one off acetate of their single Anarchy in the UK, which has no B-side. This version was mixed by producer Chris Thomas and later rejected by the band. He was then mistakenly named as the producer for the B-side of the next batch of pressings – one of which is on display. By the time these 5,000 black sleeved singles had been manufactured they too had to be rejected because of this mistake and have now become collector’s items.

Their 1976 album Never Mind The Bollocks is also featured. It attracted a prosecution under the Indecent Publications Act because of its provocative title. The band’s label A&M had had enough by then and cancelled the band’s contract. Again the copies they had already pressed became sought after by Pistol fans. Another one-off acetate of the period is a demo copy of God Save The Queen produced by Malcolm McClaren to try and find the band a new record deal.

Newspaper cuttings of the band show the public uproar over their controversial appearance on a Thames TV show hosted by Bill Grundy. Grundy invited them on for an interview after Freddie Mercury’s Queen pulled out at the last minute. He would come to rue that day. After goading the band to act as outrageously as they could they erupted with a volley of four letter words with the band’s Steve Jones the worst culprit. Grundy was carpeted for the band’s antics ad the band duly appropriated the well-sought national headlines.

Of course other bands featured in the punk rock revolution. There is memorabilia of The Clash sharing early bills with the Pistols, ticket stubs from the 100 Club Punk Festival where we are informed that Siouxsie and the Banshees performed even though they hadn’t learned to play the songs yet. The punk females drew on the inspiration of US singer-songwriter Patti Smith and began making their mark along with the men. Notable amongst these, the aforementioned Siouxsie along with Poly Styrene and the Slits.

The Roxy, in Covent Garden was the first venue devoted solely to the punk phenomenon with the Clash becoming closely associated with the venue and DJ Don Letts one of the early advocates of this new sound which now sought to incorporate elements of reggae. In hindsight it’s amusing to see the DIY fanzines on display, their typed text and felt-tipped headlines and crudely cropped and placed photos much in keeping with the raw power of the music. On many an entrepreneurial lunch break they were then Xeroxed around the world when out of eyeshot of anyone who might catch them using office equipment. Unsurprisingly, this DIY ethos of punk also launched DIY labels which for the first time challenged the record industry mainstream. We may never see its like again.