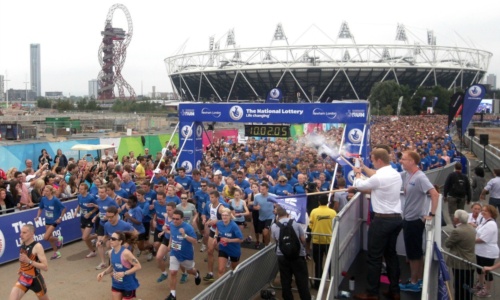 With the spring season now in full effect, there’s no excuse not to get those jogging bottoms and running shoes on and shake off that winter slumber. There’s a lot going on around London with 5k and 10k runs for both novice and experienced runners and one or two taking place in some pretty inspiring sporting locations.

If you’re looking to raise money for a good cause the British Heart Foundation organises regular events with its Queen Elizabeth Olympic Park Run on March 26th tackling heart disease along a course where British athletes triumphed in 2012. Be inspired as you take in the sights and atmosphere of the Olympic Park, The London Stadium, the Copper Box Arena and the Lee Valley VeloPark. All finishers get a medal and a Heart runners tee-shirt. Also, they’ve been nominated for a Best charity award by Runningawards.com. So that’s official thumbs up then! The entry fee is £20 for adults and £10 for children

For those who prefer to start out with a shorter distance, they can wait for the Vitality Westminster Mile on May 28th. That’s being organised by London Marathon Events and Westminster Council and since its launch in 2013 with 2,000 runners it has gone from strength to strength. This is another one for sightseers: starting off at The Mall, then along St James’ Park with the finishing line in front of Buckingham Palace. Again runners of all levels are encouraged but the elite amongst them will win a trophy named after a history-making, record-breaking elite miler – The Sir Roger Bannister Trophy.

And if you’re holding out for summer, The Great Newham Run 2017 is back again this July 2nd at the borough’s showpiece Olympic stadium. Last year’s 5k and 10k events had 15,000 runners with Stratford local Christine Ohuruogu adding her celebrity presence at the starting line.

The Vitality Westminster Mile May 28th