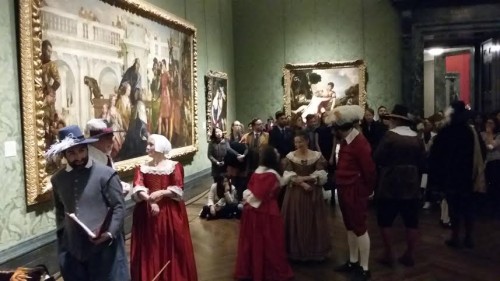 On the most romantic day of the year Valentine’s Late at the National Gallery February 12th offered a programme of love themed art and entertainment. Its normally silent Sainsburys Wing became a mini concert venue of sorts, taken over by traditionally dressed musicians with lutes and drums setting the tone for English court society in the 14th, 15th, 16th and 17th centuries. Similarly dressed dancers ran the full gamut of pirouettes, curtsies, bows and leg shakes which were all the rage on the dance floors of ages past. If this wasn’t your thing there was always the Rampart Street Ramblers downstairs dishing out their brand of folk and jazz with no obligation to either dance or watch others do so.

For amorous visitors enthusiastic enough to join in the spirit of the day, there was also the opportunity to try out historical aphrodisiacs prepared by food historian Natasha Marks. The queue, unsurprisingly, was so long they actually cordoned off the table. Her running commentary on the background to these delicacies was an eye-opener, when you were fortunate enough to catch some of what was said on the other end of that cordon.

If you came for some art (it is a gallery after all) there was always the Painted Lovers Tour of love-themed paintings led by art historians walking you through these romantic masterpieces. That or the drop-in drawing sessions where you were encouraged, whatever your ability, to try your hand at becoming the next Botticelli. Professional artists conducted this impromptu class. So another entertaining and educational date checked off the social calender with the National pulling out all the stops to show that culture doesn’t stop with your nose pressed against a Caravaggio.