We The People Festival 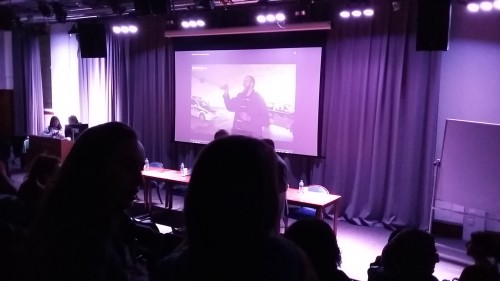 Now in its 9th year, the United Nations Association’s We The People Festival (November 11-29) explores issues of migration and the refugee crisis. It attracted a powerful selection of shorts from all over the globe, many of these personal, painful documentary accounts shot in cramped, unsanitary conditions, bringing the despair of their living situations into your own environment with an unapologetic jolt.

Libya, the Migrant Trap, directed by Veronique Mauduy, captures how African migrants are first drawn there because of its association with oil wealth and opportunity but find the country still in economic turmoil long since the overthrow of Colonel Gadaffi. This has a knock effect on their own status as tolerance and free-flowing movement has become increasingly restricted. They are now greeted with prison-like holding centres and migrant camps where there is little or no medical care and they admit to drinking toilet water to stay alive. Their confinement is brought home to you in an uncompromising way when you discover that a former zoo and the notorious Abu Salim political
prison are both used as holding centres.

Held like cattle, in many cases, their passports seized, they are caught in a no man’s land where they cannot go home even if they wanted to and cannot move on to their referred European destinations (most of them expressed a preference for Italy). Under Libyan law, they can be held here indefinitely. One Libyan native summed up the hopelessness of the situation, stating that they could not accommodate migrants when Libyans were in such a dire situation that they themselves had to go to Egypt and other neighbouring countries for medical care. Another concern is the lack of action against the smugglers ferrying them in. No border smuggler or ferryman has ever been arrested in Libya.

In Black Ulysses by Federica D’ppolito, we hear first-hand accounts of the African migrant experience in Italy. In Nardo, Lecce province they face problems finding work because of laws on illegal hiring and inevitably the hostility of locals. Voice overs of Italians being interviewed show general sympathy for their plight but are less open to them being integrated into a region where they will have to compete for resources. All of the locals interviewed declined to show their faces to camera.

One film that tried to put a human face on this inhuman crisis was the short film Growing Home directed by Faisal Attrache and Heidi Hathaway.  A Syrian barber in Jordan’s Zaatari refugee camp tries to maintain as normal a life as possible, running his in-camp barbershop and putting a smile on customer’s faces. But thoughts of home are never far away as he shares memories of his acres of fertile land back in Syria compared to the barren, desert of the camp where little grows and even the tiny stem of a melon plant is greeted as a beautiful sign until his toddler picks it. As with everything, he reacts with a shrug and a smile accepting his life for what it is but embracing hope. The growing melon plant not only signifying something more fruitful on the horizon but also their steeliness in dealing with life’s frequent disappointments.