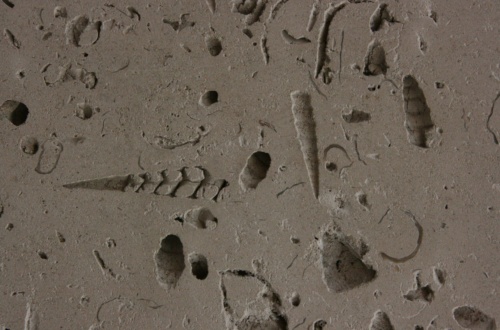 A woolly mammoth skull that is! And that was back in 1864. London and its surrounding suburbs are teeming with fossils, bones and remains from the Prehistoric, Bronze and Iron Ages. Of the 108 dinosaur species unearthed in Britain, you’d be surprised at how many were found in and around the capital, this includes the Lystrosaurus, which roamed the north-east of East London. The Ice Age 65 million years ago wiped out these gigantic creatures but the Geological Society of London believes this is the tip of the iceberg as there are still more species waiting to be discovered.

On the other size scale, 150 million year old tiny snail-like creatures can be found climbing the stairs at Green Park Tube Station. Not literally, but these fossilized primordial creatures are locked into the Portland Stone, a Jurassic limestone that was used to construct the station and you can actually see them in the stonework. So watch what you step on during rush hour!

A trip to the Museum of London will educate about the Neolithic, Bronze and Iron Age finds across the capital. Bronze Age alder brushwood tracks built on peat were found in West Ham, Beckton and Barking and from the same period the remains of a bridge in Vauxhall. Silts and peats in the River Thames have preserved Prehistoric, Bronze and Iron Age material much of which is now displayed at the museum. Because of it’s unique composition, the Thames in particular and London generally have emerged as treasure troves of archaeological finds, with over half of all the UK’s Iron Age art and metalwork discovered there.

London’s museums are the best first stop for up close inspection of these remarkable items, which include earthenware, art, swords, helmets, clubs, bridges and constructed paths. The collection at the Museum of London is particularly extensive in this respect.