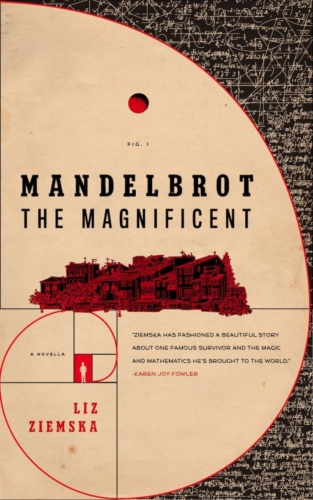 Review of: Mandelbrot the Magnificent (Book)

Author Liz Ziemska describes herself as a ‘writer of slightly strange fiction’ and her latest book, steeped in the wonders of complex mathematics and the snatched innocence of childhood, holds true to this. Set in a Jewish community in Warsaw, Poland, six-year-old Benoit lives a comfortable life with his dentist mother, tailor father and younger brother but it’s when his brainy Uncle Stoze introduces him to the fascinating subject of deep mathematics that his destiny awakens. His Uncle’s conversations with his awe-struck nephew are abruptly interrupted by the impending invasion of the Nazis. However, the wonders of mathematics and geometry never leave him and in fact take on an almost magical ascent as global conflict gathers momentum.

Note: this Benoit Mandelbrot is undoubtedly based on an actual Polish-born mathematician with the same name, date of birth and family history as the character and who developed a set of equations called the Mandelbrot set. But there the similarities end because in this book the character takes this mathematics to a new level – literally.

Complex algorithms may not necessarily be your thing, the genius of mathematicians such as Euclid, Fibonacci and Apollonius of Perga may have you scratching your head, but the mind-boggling material becomes crystal clear and totally absorbing because of the author’s flair for characterization and story-telling. You don’t have to be a genius yourself to grasp the content but you soon realize that’s exactly what Benoit is. This child prodigy faces great obstacles in the face of religious persecution and hatred but retreats into his mathematics until he unearths new meaning in their constructs of nature, which he hopes will one day set him free. Considering the super-cerebral subject matter and the clever way it is presented, you suspect the author may have a touch of this genius too.

The additional geometric and astronomical diagrams alongside the text give it the feel of those mathematic books that once gave you a headache at school, but let you into Benoit’s private world. At times you ponder whether the poor child is a tad too obsessed because he can’t get through a bowl of soup without seeing new theorems in it as he spoons the remains. The dye is set early: a childhood memory of him on a merry-go-round relates how his imagination goes shooting off into complex orbital calculations, at a tender age when you or I would either be holding on for dear life or enjoying the moment.

However, his prodigious pragmatism and logic prove exceptional gifts when his very existence and that of his family is threatened. Forced to grow up quickly, he engineers their escape from the Nazis using the type of left-brained thought processes that could even outdo the great Stephen Hawking. In fact his unstoppable mind goes beyond nature into supernature, drawing mathematics away from its terra firma and into the heavens. Einstein, another great genius once stated “Logic will take you from A to B but imagination will take you everywhere” and similarly this outstanding novelette knows no bounds.

Tagged with:     Mandelbrot the Magnificent