The Black Prince of Florence (Book) 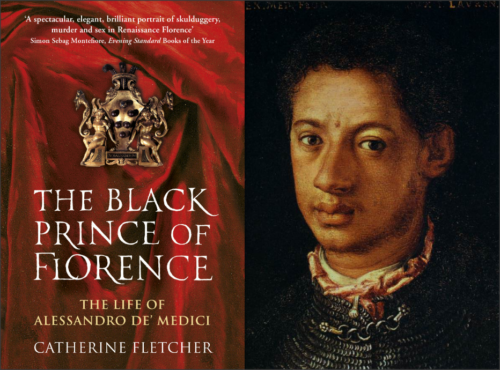 Review of: The Black Prince of Florence (Book)

Historical accounts of a Renaissance Florence ruled by a ‘half negro’ duke called Alessandro de Medici are meticulously examined by author Caroline Fletcher. He was also the first duke of Florence so any reader would naturally be curious to discover how a black nobleman reaching that landmark fared in the machiavellian environment of Medici-ruled Florence.

That his rule and life came to an untimely end is, perhaps, not so surprising, considering the racial hierarchy and bloodline succession issues of the day. What is surprising is that it was at the hands of his own cousin and close companion Lorenzinho de Medici and also earlier challenges to his rule had been thwarted by two of the most powerful men in Europe, if not the world – Pope Clement VII and Charles V, the head of the Holy Roman Empire.

Both men were super-powerful patrons whose authority ensured even a Medici heir fathered with an African or half-African slave would rule Florence. Such was the Pope’s full-blooded support for his darker-coloured nephew Alessandro over his white nephew Ippolito that many historians suspected that he might have fathered him. We are informed that centuries later in 1909 a book by English historian H.B. Cotterill about Renaissance Italy repeated this claim about papal parentage and also stated Alessandro’s mother was a mulatto woman.

In Caroline Fletcher’s book, we are shown the terms ‘mulatto’ ‘negro’ and ‘slave’ need clarifying’. She sifts through Renaissance biographies and other official records to pinpoint whether his mother Simonetta was, in fact, a slave, servant or just a Caucasian Italian woman of lowest social status. And if she was a slave, whether she was an Arab Moor, Negro African or mulatto. The official accounts here are varied yet on further examination suggest common ground.

Alessandro’s half sister Catherine de Medici would later become queen and queen mother of France and it was at her court that historian Jean Nestor wrote a book on the house of Medici. It includes a passage which states: ‘Lorenzo de Medici, duke of Urbino and father of Catherine de Medici had a natural son called Alessandro, born to a half-negro woman.’ This book was published with royal privilege.

Also, the official biographer of Cosimo de Medici, who succeeded his cousin Alessandro after his death, describes him as “of a brown colour, with large lips and frizzy hair.” 1 in 24 Italians during this period were slaves with the majority of them African. Another renowned writer of the time pointed this out with warnings that negro features would inevitably emerge in the Italian bloodline.

Whether it was his race or his alleged tyrannical rule that brought him down, it’s clear that Alessandro de Medici did have African blood and also enjoyed the support of the most powerful Renaissance imperial and religious leaders. When Pope Clement VII died Alessandro’s days were numbered and even his marriage to the daughter of his other patron, Charles V, couldn’t save him.

Tagged with:     Black Prince of Florence