When Khan & Zayn looked in ‘one direction’ 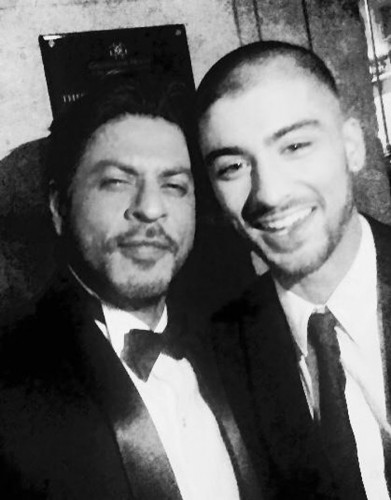 A single monochrome image was the subject of much social media frenzy this weekend garnering over 100k retweets and 140k favourites by Twiterrati.

Featuring the superstar actor from the B-town film world of India, Shah Rukh Khan and former One Direction band mate and teen heart throb Zayn Malik, the photo was  tweeted by SRK.

Shah Rukh and Zayn were both attending the 5th Asian Awards held at the posh Grosvenor House Hotel in London on April 17, where Asian glitterati from business, sports, music, and entertainment industry were honoured. SRK and Malik picked up an award for outstanding contribution to cinema and music respectively.

This was Zayn’s first public appearance since he announced his time up with One Direction. Zayn also admitted to being influenced by Bollywood films especially with regards to his view on love. We think that’s super hot!

This kid is so cool. May Allah bless him. Dinner time at the Asian Awards. pic.twitter.com/l0gV12n0kv