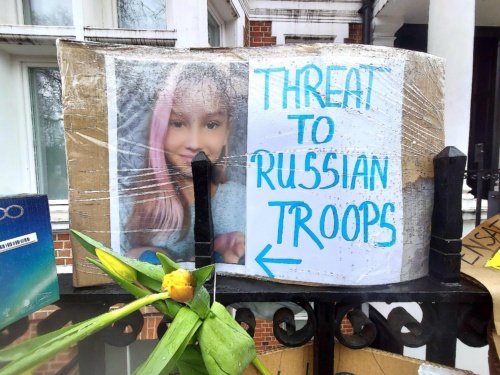 With outrage spreading over Russia’s invasion of Ukraine and the world faced with the prospect of a widening conflict, WHL’s focus is away from London’s social, cultural and community news and inevitably towards these global concerns.

Ukrainians gathered all over London to protest the Russian invasion and ask for more UK support. There were emotional demonstrations outside the Russian embassy in Kensington. Many of the protestors say they feel desperate and expressed concerns about relatives in the Ukraine who were unable to flee or wished to stay and defend their country. Such is the close historic and generational ties between the two countries that some amongst the Ukrainian protestors claim to have Russian parents or grandparents.

1 million Ukrainians have now left the country – 250,000 fled to Poland. 102 civilians have been killed. 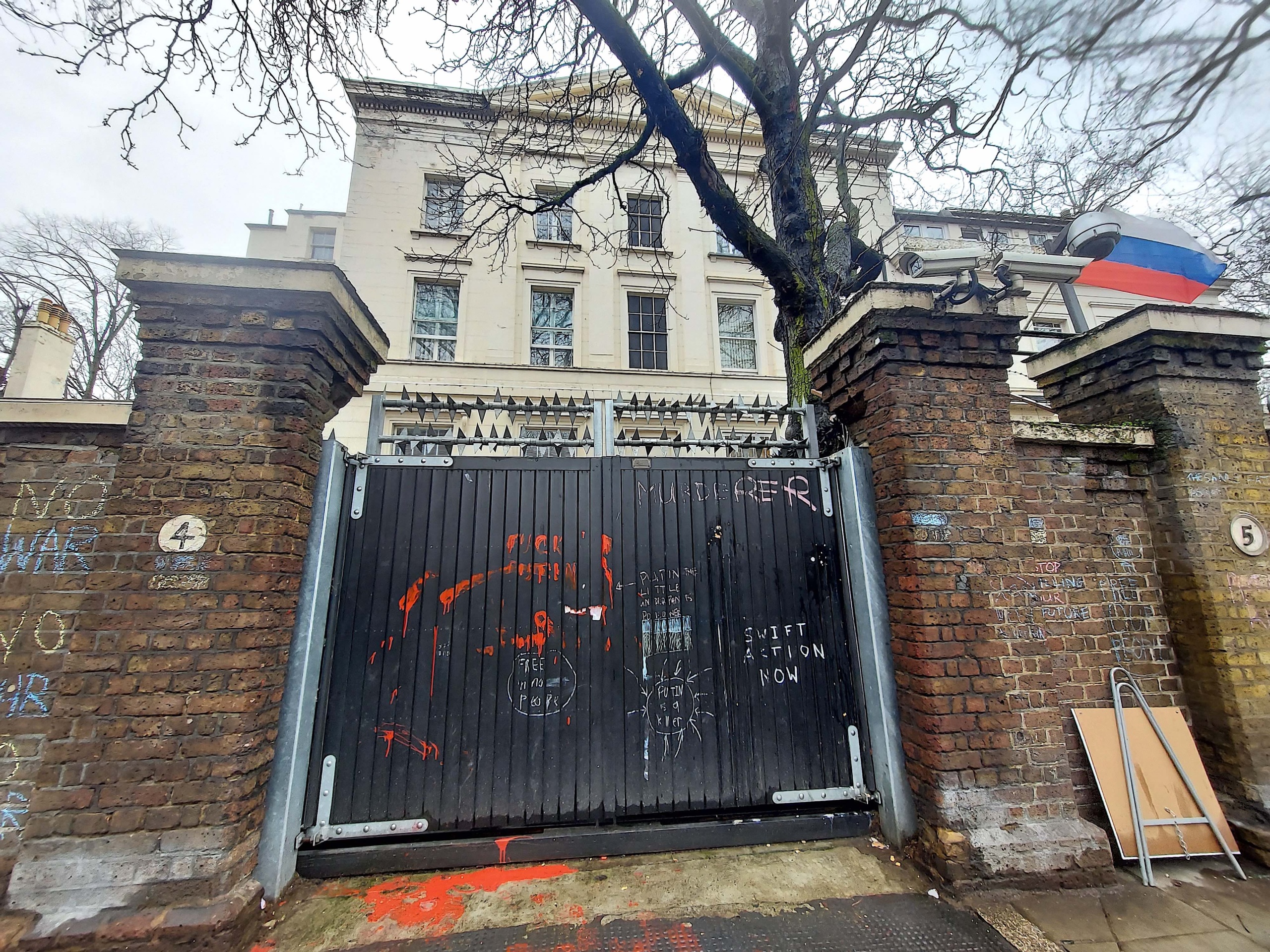 The words ‘Murderer’ daubed on the Russian embassy entrance in Kensington

Hundreds waving flags and holding banners chanted for an end to the war and the Ukrainian anthem rang out along with impassioned pleas for international action. 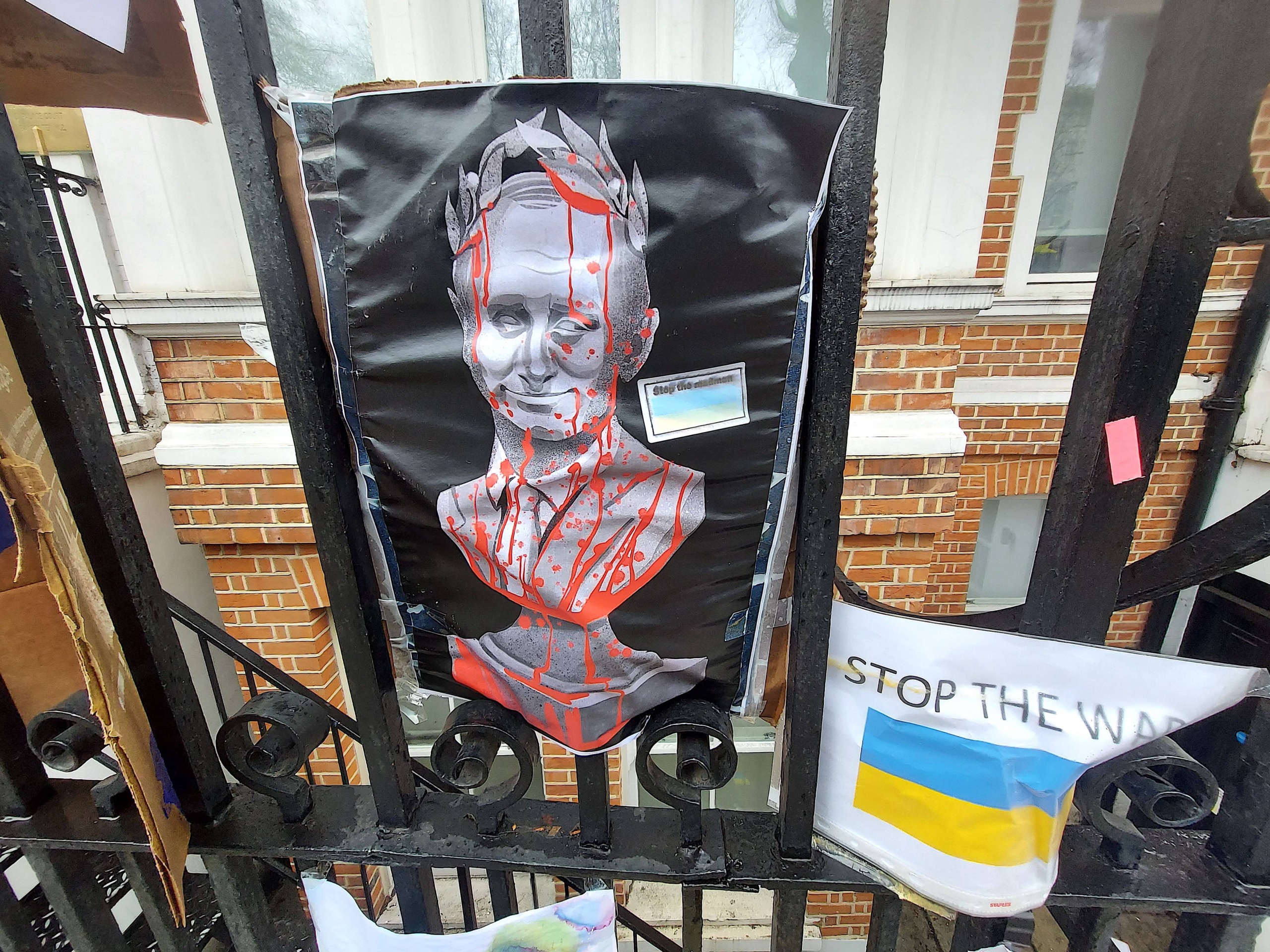 The EU has introduced a raft of sanctions aimed at crippling the Russian war machine and NATO has put its forces on alert and called upon Russia to withdraw from Ukrainian territory. It has also supplied air defence missiles and anti-tank weapons. However, Ukrainians based in London, and the Ukrainian president have asked for more support and unilateral pressure on Russia. 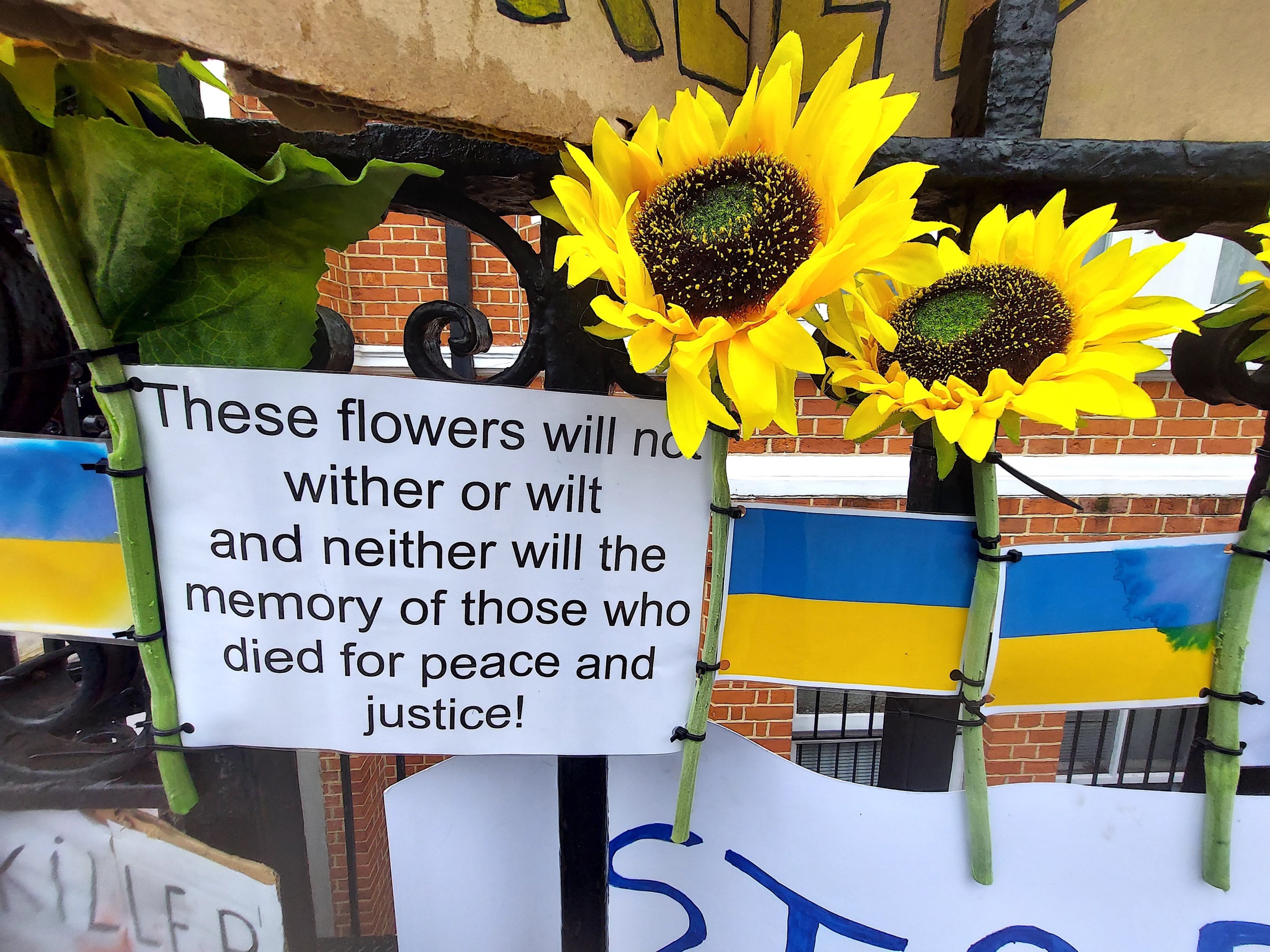 An emergency session of the UN General Assembly – one of only 10 in the last 70 years – met to discuss the conflict.

Antonio Guterres, Secretary-General of the United Nations commenting on the recent escalation of aggression –  “nothing can justify the use of nuclear weapons”

Ukrainian UN delegate Serhiy Kysltsya compared the military incursion to the Third Reich’s invasion of Ukraine during the Second World War. He also said: “If Ukraine does not survive we must not be surprised if democracy fails next.”

We interviewed Russian embassy protestor Colin Asprey from St Albans who held a banner encouraging passing traffic to sound their horns in support of Ukraine. The result? – a non-stop siren of horns along the main road. The chorus of noise continued to spread well after the cars moved past the banner. A resounding show of solidarity in Notting Hill Gate. 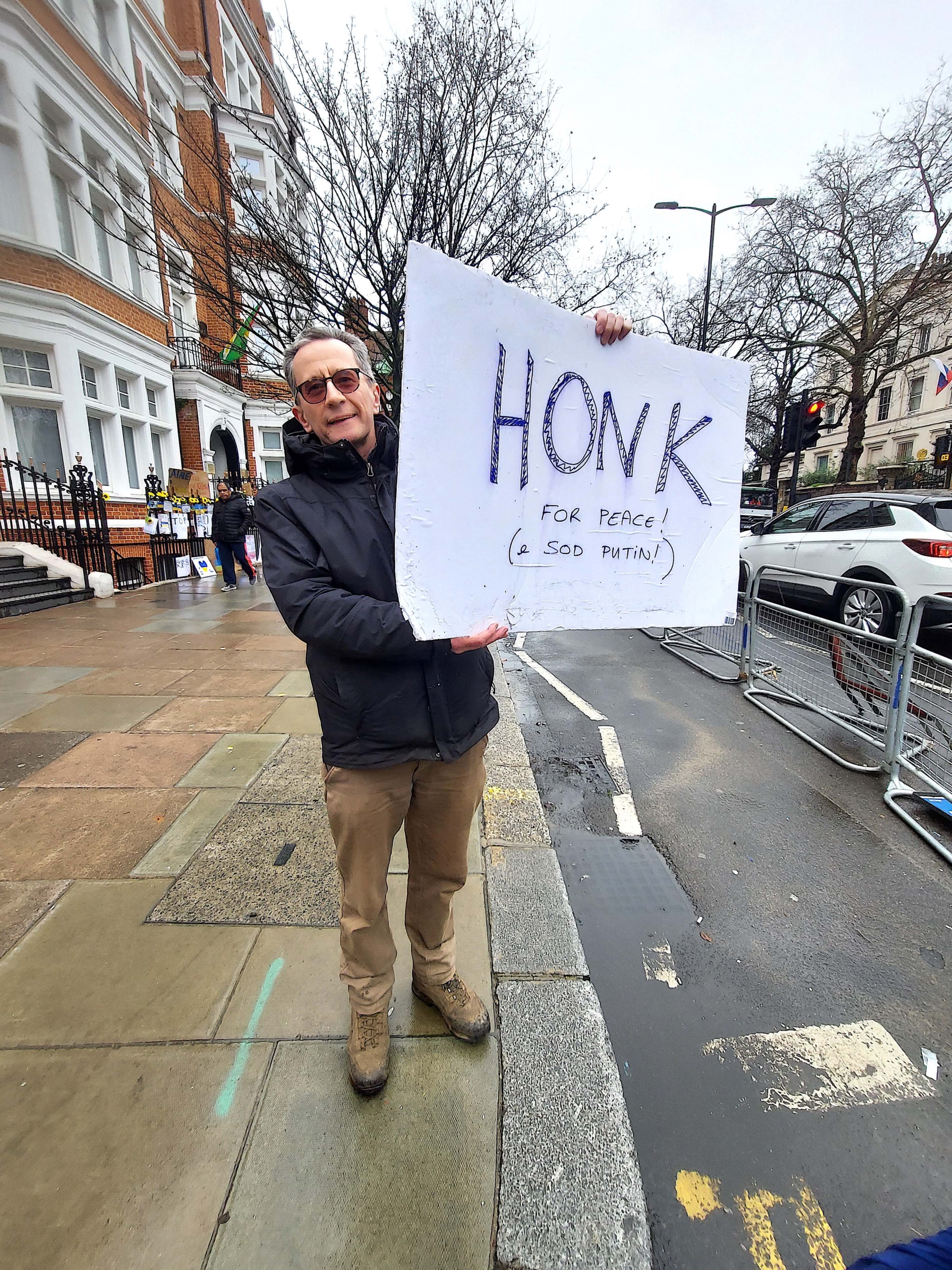 Colin says: “I am here to show some solidarity with the people of Ukraine. When the invasion happened I was absolutely stunned – beside myself with disbelief.  And I was thinking, what if it happened to us here in Britain. Just last night I heard a helicopter going over my garden and thought how fortunate I was not to have to worry whether it’s a friend or foe. The Ukrainians are showing so much bravery.” He added. “The response of the public and the passing traffic shows just how much Britain is behind Ukraine.”

So what has been the reaction around the world?

Europe and North America have, in effect, blocked the flow of the Russian Central Bank’s international reserves

Boris Johnson said of Putin: “his savagery will be met with unrelenting economic pressure.”

Britain passes a law banning ships with any Russian connections from entering its ports.

The photos below show every inch of the Russian embassy walls covered in anti-war graffiti and messages. Police had to barricade the walls and the entrance to prevent any more protestors expressing their anger. 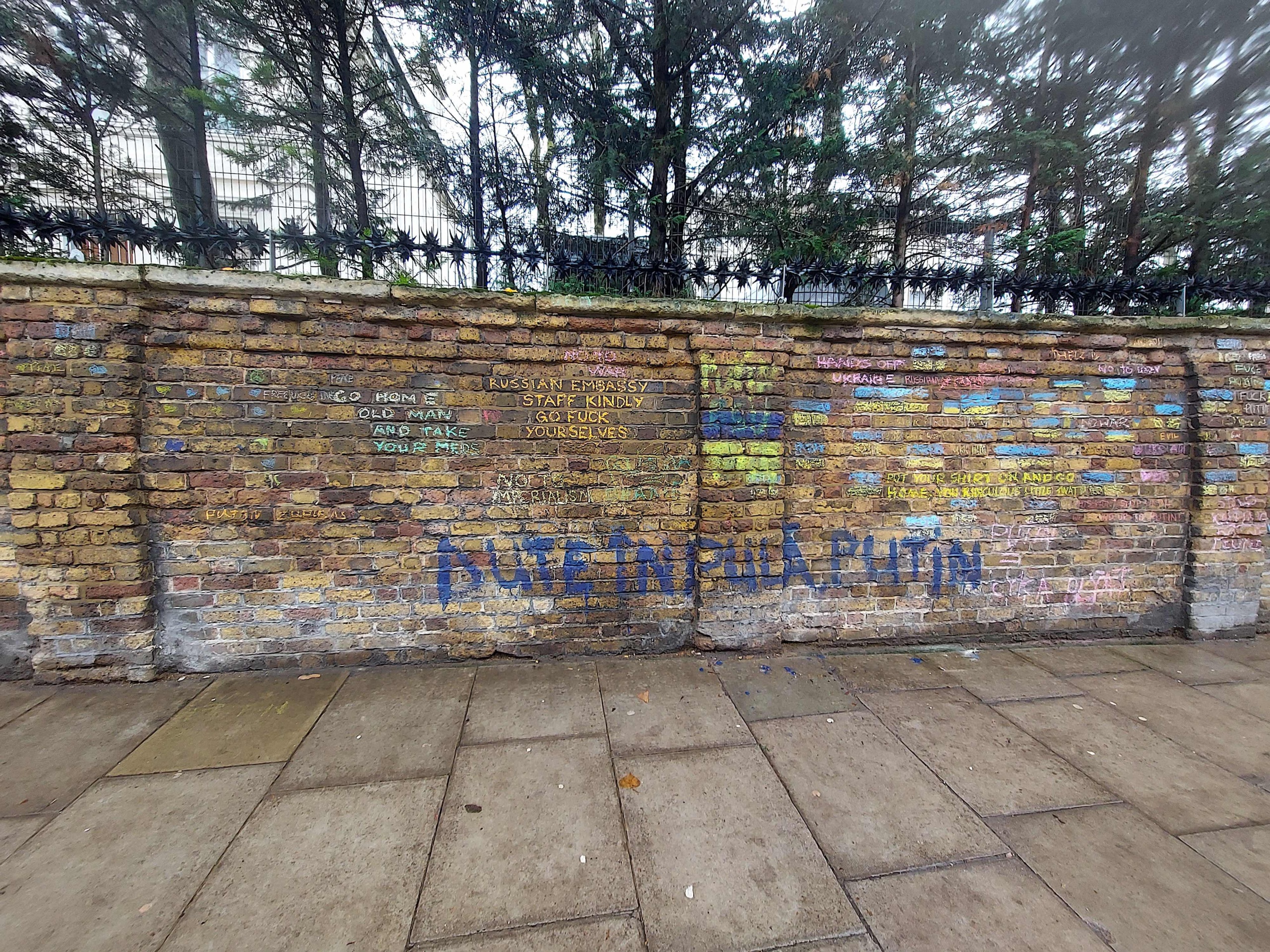 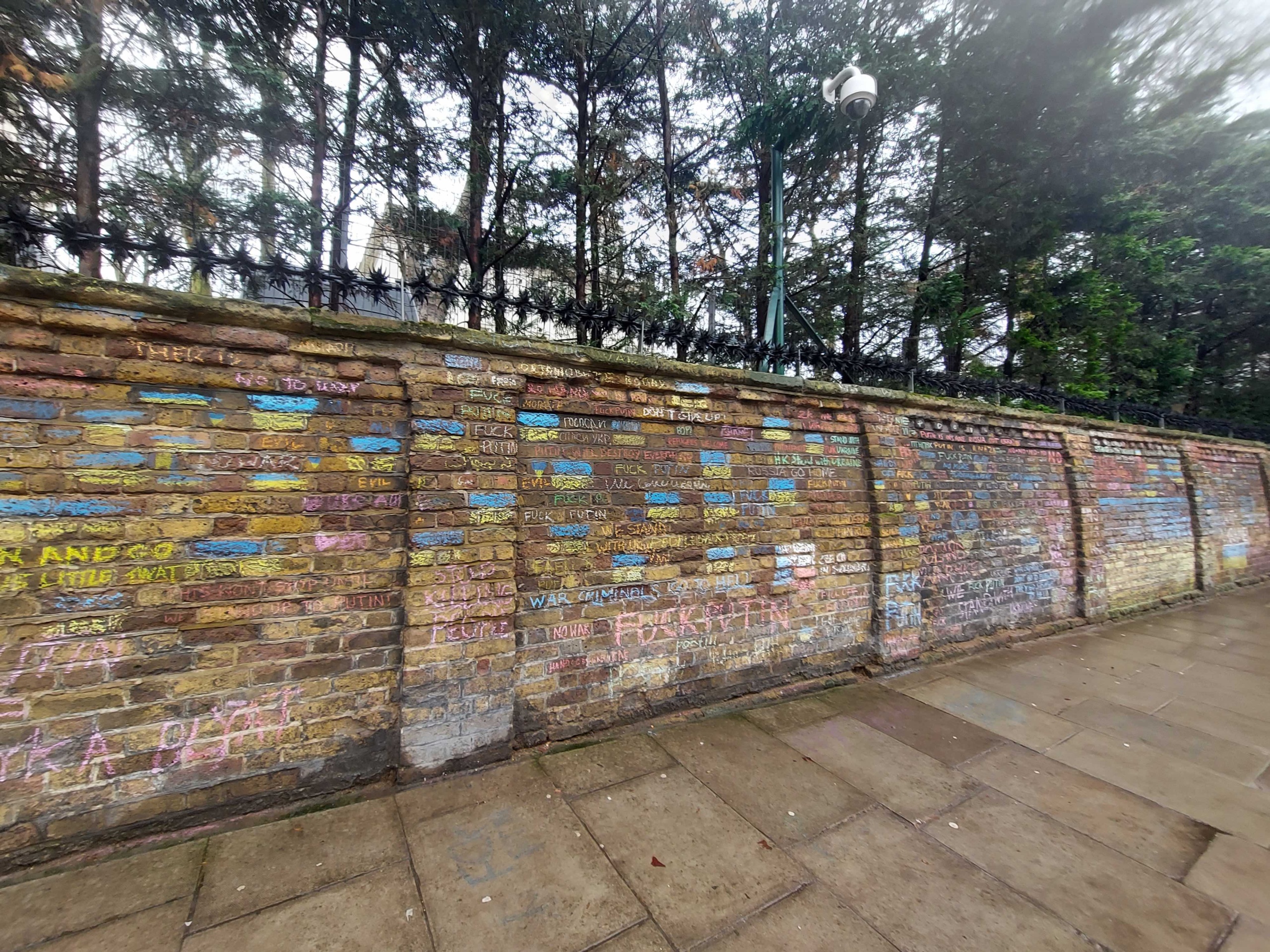