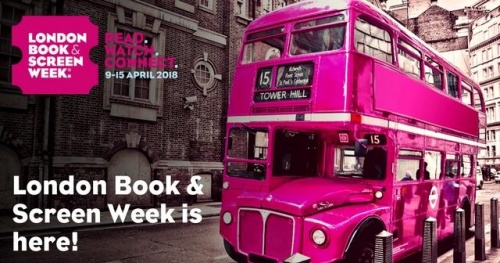 LONDON BOOK AND SCREEN WEEK  might seem a tenuous creative mix but not when you consider it is celebrating one thing – storytelling, regardless of its form. So whether you’re a book lover, aspiring author, bestseller, film buff, independent film-maker or Hollywood bigwig, then London Book and Screen Week 9- 15th April offers opportunities for networking with those in your industry. And what’s more, it’s being lauded as the biggest ever in the capital and not to be missed. This seven-day event runs at the same time as London Book Fair, benefiting from the footfall from the 25,000 who will be attending that event.

To get you salivating about books and films take a glance below. We have a top three list in each category of the best we’ve reviewed in What’s Hot London? magazine. So in no particular order…..

MANDELBROT THE MAGNIFICENT – Author Liz Ziemska presents the innocence of childhood in WW2 Warsaw steeped in complex magical mathematics, as the flight from the Nazis ensues. Benoit Mandelbrot is a child fascinated with numbers, equations and all the great masters of geometry and mathematics. His own prodigious grasp of the subject comes to his rescue when the threat looms even after he emigrates with his family. Read the Mandelbrot the Magnificent review.

RULES FOR THURSDAY LOVERS – Yana Stajno’s debut novel bounces along at a rambunctious pace from opening chapter to final paragraph, bringing together two old school pals – the slightly snooty Fiona and more down to earth, personable Angie – at a timeshare event on a London barge. But this is a trip down the Thames with a difference as they soon strike up a very unusual love partnership with a stranger. Read the Rules for Thursday Lovers review.

INSIDE THE WAVE – This collection of poetry won the Costa Book of the Year 2018, triumphing in the overall award category. Helen Dunmore penned most of the verse while dying of cancer so is in effect her commentary on mortality and the mythical and spiritual worlds of the living and dying. Her reflections sometimes straddle elusive areas not immediately identifiable with either yet inextricably linked. Read the Inside the Wave review.

THE KILLING OF A SACRED DEER – A five-star review for Yorgos Lanthimos’ edgy, off-key thriller. It stars Colin Farrell as cardiovascular surgeon Steven Murphy and Nicole Kidman plays his ophthalmologist wife. The doctor befriends a mysterious fatherless teen called Martin (Barry Keoghan) and their emotionless, deadpan conversations set a chilly atmosphere which augurs the bizarre and terrifying events to come. Read the The Killing of a Sacred Deer review.

MOTHER! – Darron Aronofsky’s most recent psychological horror is included in this list for sheer creative audacity and his refusal to be limited by established film models. He uses a tossed salad mix of religious metaphor and political fervour to comment on the madness of celebrity adulation with an impotent poet as the subject of this adoration. The mad mix works! Like marmite, you’ll either love or hate it. Read the Mother! review.

HIGH-RISE – The inclusion of this Ben Wheatley-directed dystopian movie is pretty apt for London Screen and Book Week as it was adapted from J.G. Ballard’s 1975 novel of the same name. The disruptive emergence of a self-contained society based in a high rise building certainly suggests themes of social stratification. To find out more read the High-Rise review.

Tagged with:     Book and Screen